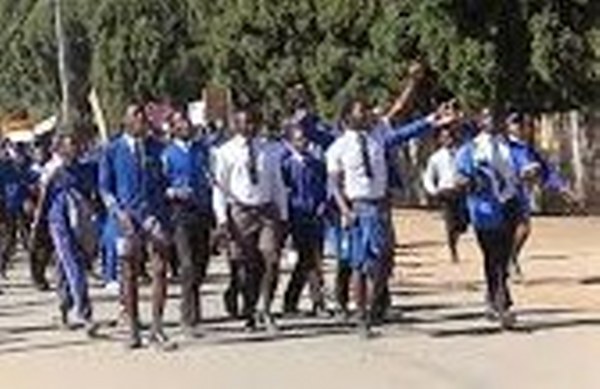 CRANBORNE Boys High School pupils yesterday demonstrated against being deprived of sporting activities. They accused the headmaster of failing to buy school uniforms yet he bought himself a Toyota Hilux.

The pupils marched around the community demanding change in their school’s approach to sport.

They also called for the headmaster’s ouster saying he was the major impediment to sport development at the school.

Head boy Ryan Rusere said they wanted time for sport which was the major reason they had downed pens.

“Our school is no longer recognised as an (former) A school because of the poor standards it has reached, we decided to lock the main gate so that he won’t escape while we demonstrate.

“The headmaster is against sport and there was a time when we had to raise money through our tuck to go for a soccer match.

“There is one set of sport uniform for all games, which is a disadvantage when several games are being played,” said Rusere.

Some of the students (names withheld) were complaining about toilet blockages, poor science labs and insufficient computers for the computer laboratory.

“Every week we have sewer bursts and dirty water will be flowing everywhere which is a health hazard.

“Our science labs no longer have enough equipment to conduct practical subjects which is a disadvantage for us as students.

“The headmaster turned the swimming pool changing rooms into a fowl run for his poultry project.

“As students we do not even get to benefit from his personal projects, all we do is work without any production,” students said.

The school headmaster Denis Masenga could not be reached for any comment as he was locked in his office.

The District Schools Inspector Absolom Chinoona could not give the media any comment on the matters which had triggered the students to demonstrate but however later on addressed the Prefects and told them that their plights had been heard and promised change.

Teachers from the school (names withheld) told the media that children were not happy at all and change was needed.

“The headmaster bought a new Toyota Hilux D4D worth $135 000 and tells the pupils that the school can’t afford sport uniforms, children are also human beings they observe these things.

“Most teachers here are in support of the children’s rights; Monday they should be starting examinations and each child is required to come with four exercise books to use as answer sheets which is not fair considering they pay school fees.

“It should be the school’s duty to buy examination stationery.

“Children are not allowed to do events but the headmaster has an ongoing chicken project where he has 120 off layers and sells eggs here at the school.”