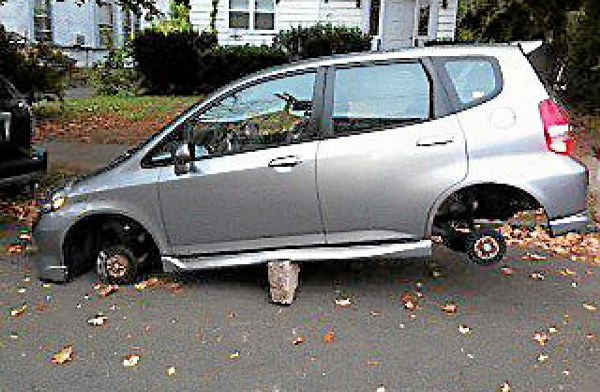 A Harare man appeared in court on Tuesday on allegations of stealing a motor vehicle from a fuel queue in Harare’s central business district (CBD).

He was remanded in custody to July 23.

It is alleged that on May 20, the complainant parked his motor vehicle in a fuel queue at Zuva Service Station, Montague Shopping Centre, Harare.

Sixpence allegedly got into the complainant’s car and drove away.

The court heard that the complainant came back after a short while and found his car missing, prompting him to make a report to the police.

It is the State’s case that Sixpence drove the complainant’s car to Chinhoyi where he removed the wheels, car battery, headlights, oil cap and dip stick.

He then sold some of the parts and dumped the car in the Mzare area of Chinhoyi.

The dumped vehicle was allegedly recovered by detectives from CID Chinhoyi on June 10.

The court heard that Sixpence was arrested on June 27 while driving another stolen motor vehicle.

Only three wheels which he had stolen from the complainant’s cars were recovered.

News Tanya Mugabe - 3 June 2020 0
MDC Alliance leader, Nelson Chamisa has said the government is running scared of the people and it is time to boot President Emmerson Mnangagwa...

News Sekai Moyo - 3 June 2020 0
AFTER PROBABLY one of the most vicious cross examinations of an investigating officer by a defence lawyer, a Harare magistrate has freed Nelson Chamisa's...

Hembe chaidzo haana, his wife was stubborn, she dumped him when he fell sick:...

News Cynthia Goba - 3 June 2020 0
Comedian Charles “Marabha” Merisi’s health condition has deteriorated. The ever-laughing actor fell seriously ill on Monday when they were set for a promotional shoot with...

News Tanya Mugabe - 3 June 2020 0
A nongovernmental organization based in South Africa has mobilised food hampers for 300 distressed Zimbabweans in the neighboring country, with 1 000 more having...

News Muza Mpofu - 3 June 2020 0
Freddy “Kapfupi” Manjalima is a worried man following the sickness of his long-time friend Marabha. The musician-cum-comedian had reunited with Marabha for a month now...

I have now resorted to selling beer at night in mountains: MuChina speaks out

News Muza Mpofu - 3 June 2020 0
VILLAGERS in Wedza have resorted to gathering and drinking opaque beer in mountains to evade arrest during the Covid-19 lockdown. There are restrictions on the...

News Nelson Bhebhe - 3 June 2020 0
A SENIOR police officer was reportedly assaulted by a junior female officer after he tried to apprehend her for a bribe she had allegedly...

Horror as man kills girlfriend after seeing chats with her other boyfriend in her...

News Tshuma Rueben - 3 June 2020 0
Crowborough community was on Tuesday left horrified after a young woman was murdered by her boyfriend who she was cohabiting with since the beginning...

Drama in Zimbabwe: Khupe now effectively in charge of 2 parties in parliament after...