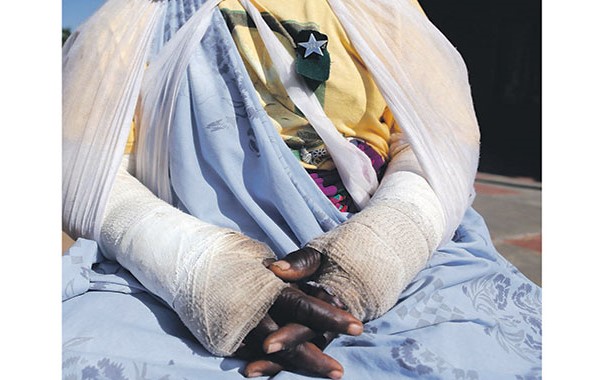 AFTER he allegedly raped Sophie Vuyeka (59), who later died, the thug couldn’t rape the second woman.

“He demanded I remove my ZCC badge as it was making him lose his erection,” the gogo said.

The man apparently broke the women’s arms by attacking them with a stick and then tied them up with their traditional Tsonga clothes.

The gogos were collecting firewood two weeks ago when the man attacked them.

The man is allegedly still targeting women in the surrounding villages.

The second gogo from Muswana Village, outside Giyani, told Daily Sun the man in his 20s demanded money after he lost his erection.

“We waited until it was dark and he walked with us to our houses to get money. When Sophie tried to run away, he hit her on the head but I managed to get away.”

“I do everything for my wife. I don’t know how I will survive at the project without her.”

Sophie’s son Sipho Maluleke (35) said: “I don’t know who’ll care for the kids when I go back to work.”

Chief Eric Chauke of the Mdavula Tribal Council said there were at least five cases of women being raped while out in the veld collecting firewood.

“On Sunday we’ll go to the villages to discuss the safety of women,” he said.

Colonel Moatshe Ngoepe said: “We ask women to be careful at all times and to walk in groups.”