A petition to deport singer Tytan from the UK has gone viral online.

This comes after Tytan broke up with Olinda with both parties claiming domestic abuse against the other.

In a live Instagram video Olinda suggested that Tytan was showboating the demise of their relationship on social media so he could get a visa to stay in the UK.

However ‘concerned’ citizens plan to thwart Tytan’s plans by starting a petition to have him sent packing to Zim.

Mediocre musician Njabulo ‘Tytan’ Nkomo’s scandals have been all over the Internet since we all got to know about him!

He came to the UK on spousal visa and he has a 4 month old baby and in that time when his wife was pregnant he spent his time sending photos of himself na_ked showing his private parts to her best friend to seduce her and a host of other females and has now left his marital home and is claiming domestic abuse!

He’s only been in the country 6 months with a 4 month old baby he’s married to a British citizen of Zimbabwean Heritage and I have reason to believe he married her under false pretences to escape the hardships in Zimbabwe and use a woman who was well known to have insecurities and had broken down online just a few months prior to them dating over another man (his former friend) who had cheated on her.

He preyed on her weak emotional state and I think he researched our laws and found a loop hole and his actions are an insult to the institution of marriage.

I think he Should be sent back to Zimbabwe and he can re apply and bring forth his case of domestic abuse but granting him citizenship will open up an opportunity for other Zimbabwean people to use the same pathway to make their way to the United Kingdom.

I advocate for honest and just entrance into our country and such acts of FRAUD and taking advantage of our liberal and human rights focused systems should not be ABUSED and we should not fall for this SCAM. Stop this wannabe be #90dayfiance type fraud. It will affect those who genuinely meet partners In foreign places.

No to fraud. No to lies. No to using our system. He needs to #BREXIT we should vote for him to leave! 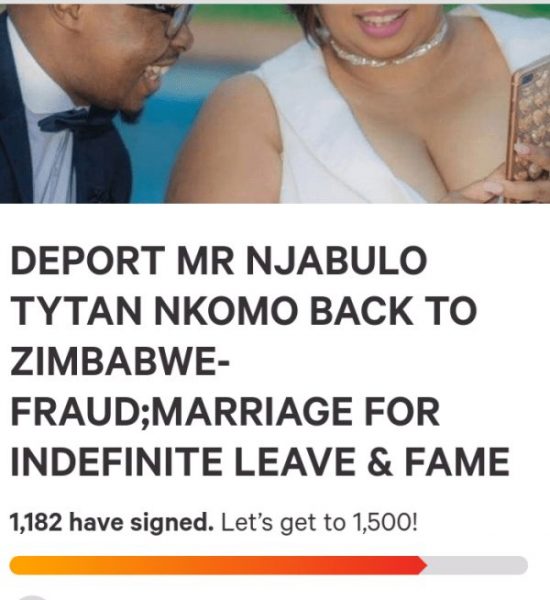 News Tshuma Rueben - 26 October 2020 0
THE sun was scorching hot yesterday, so Nthabiseng Radebe (16) and Maphelo Klass (13) went for a swim in the Klipspruit Valley Stream. Sadly, they...
Loading...