GOVERNMENT has increased civil servants’ salaries by a massive 76 percent, a development that will see the lowest paid worker earning $1 023 up from $582.

A statement released yesterday by the Apex Council, which was signed by both president Mrs Cecilia Alexander and her deputy Mr Thomas Muzondo, read: “Following the rejection of a 10 percent Government offer by the Apex Council, the NJNC meeting convened today, 23 August 2019, saw Government move their offer to 76 percent of the total package with effect from the 1st of August 2019.

“The offer does not meet the stated position of the workers, which is pegged at $4 750 for the least paid civil servant. According to this development, the lowest paid worker is expected to take home $1 023 up from $582”.

Mrs Alexander said the Apex Council requested for time to consult its members over the salary increase offer.

The latest salary increment comes at a time when Government has said all civil servants will get their bonuses for the year in November, with Finance and Economic Development Minister Professor Mthuli Ncube conceding that since the introduction of Statutory Instrument (SI) 142 of 2019, also known as Reserve Bank of Zimbabwe (Legal Tender) Regulations, wage and salary erosion was now a big challenge, hence the need to continuously adjust wages and salaries.

Yesterday’s salary increment addresses concerns by most civil servants including lecturers at the country’s state universities and other tertiary institutions who had threatened to go on strike next month citing failure to adjust their salaries in line with the prevailing economic challenges.

Zimbabwe State Universities’ Union of Academics (ZISUUA) president Mr Alois Muzvuwe confirmed in a statement that lecturers had planned to down tools with effect from September 8.

However, in an interview after the Hillside Teachers’ College graduation in Bulawayo yesterday, Higher and Tertiary Education, Science and Technology Development Permanent Secretary Professor Fanuel Tagwira said Government was aware that academic and support staff as well as other government employees were clamouring for salary increases and discussions were in progress to improve their conditions of service.

He said Treasury would come up with favourable salaries for civil servants.

“I want to encourage our lecturers and support staff to be patient. We know that they’re going through financial difficulties just like all other civil servants and we know that definitely the Ministry of Finance will look into this situation and come up with favourable salaries and conditions of service,” said Prof Tagwira. 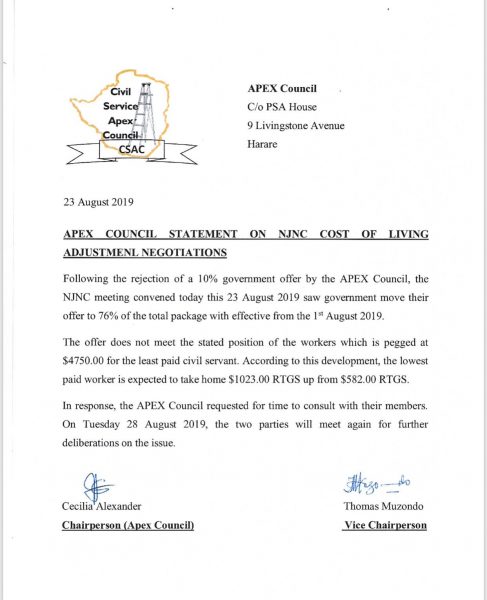