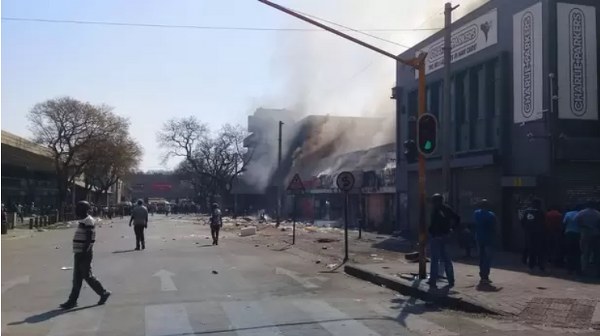 Thousands of taxis blocked several roads in the Pretoria CBD on Wednesday morning as protests in the area continued.

Angry taxi drivers also littered the streets with an array of objects after a taxi driver was shot dead on Tuesday. The atmosphere is tense and volatile.

According to Sowetan, taxi operators found people, believed to be police officers, were allegedly involved in the selling of drugs on Tuesday.

Angry taxi operators then used the city’s buses to block traffic to “deal” with the nyaope (drug) boys.

“A shooting which resulted in the death of a taxi driver is reported to have incited the riots, which led to two A Re Yeng buses, three Tshwane Bus Service (TBS) buses, a Gautrain bus and two trucks being utilised to blockade the roads. A Re Yeng and TBS operations were halted for the rest of the day in the interest of safety,” Tshwane Transport MMC Sheila Senkubuge said.

Parts of the CBD are considered a no-go zone and a heavy police presence had been deployed in the affected areas.

Senkubuge said in a statement on Tuesday that parts of the inner city came to a standstill as disgruntled protesters seized six vehicles.

“The taking of a human life is never justified and the perpetrators of this murder and unlawful usage of public transport vehicles must be made accountable for these crimes,” Senkubuge said.

The details of the deceased will be communicated after the notification of the next of kin and through the police platforms.

Senkubuge apologised for the inconvenience caused by the disruptions to public transport within the CBD and urged commuters to avoid the CBD and take alternative routes and modes of transport.