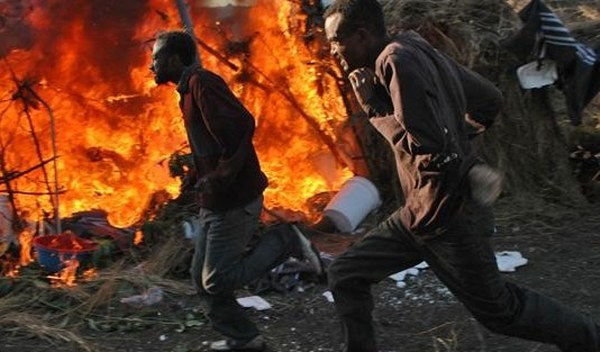 A 45-year old Zimbabwean commercial truck driver, Emmanuel Manyere, has lost all his belongings and now wants to go back home after the place he was renting in Jeppestown near Johannesburg was attacked by a suspected South African gang, claiming that foreigners are grabbing all jobs and selling dangerous drugs to locals.

In an interview, Manyere said the assailants, believed to be an anti-immigrants gang known as Mzansi Wethu (Our South Africa), invaded his place two days ago, burnt his clothes, bed, and other belongings while he was at work.

“… They attacked Jeppestown where I’m staying. They managed to break into the house and they took whatever they wanted and they burnt everything, things like (my) refrigerator, radio, tv (television) and when I came from work I found nothing. Right now I’m left with the clothes I was putting on that day. At the moment I haven’t gone back to work because I don’t even have (decent) clothes.

“… As I’m talking to you right now I haven’t been going to work for one week and here is South Africa as a foreigner if you don’t go to work you don’t get paid and you can’t go to work with rubbish clothes. So, I need to raise some money to buy some (the company) uniform that was burnt. My situation is really, really bad … And I really don’t know, I really don’t know what I will do next. It’s really bad.”

He now lives at a friend’s place in Olivine near Johannesburg.

Manyere, a father of five, said his family wants him to come back home as his life is now in danger in South Africa.

“All of them are saying come back home father, come back baba, come back but as Africans you can’t get back home without something (for your family). If I can raise some money, I’m thinking of going back home. I’m so traumatized.”

Boy begs for mercy as residents nearly kill him after catching him red-handed undressing...

News Muza Mpofu - 17 September 2020 0
IF THEY had to take the law into their own hands to end violent crime, they would gladly do so. These were the comments from...
Loading...