Leader of the country’s latest opposition political party, LEAD, Linda Masarira has reported his husband, Gilbert Kaingidza to the police for brutally assaulting her over the weekend.

Kaingidza was arrested after Masarira sought police refuge before being taken to a local hospital for attention after the assault.

According to sources, the fight was triggered by evidence allegedly discovered by Masarira, suggesting that Kaingidza was an agent of her political rivals who was planted into her life to spy on her.

Masarira formally tied the knot with her man Gilbert Kaingidza secretly sometime in June this year.

The couple broke the internet when Linda was pictured wearing a Zanu Pf regalia which drew widespread criticism resulting in her being expelled from the MDC led by Thokozani Khupe.

Below is the pair’s marriage certificate: 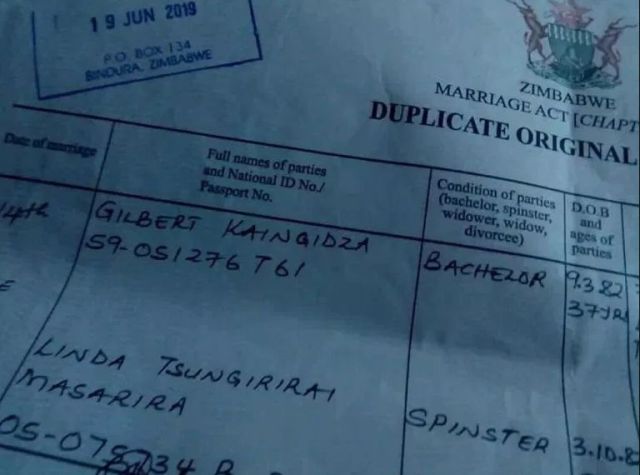 It appears the couple tied the knot on 14 June 2019 but the pictures the event might have been kept secret.