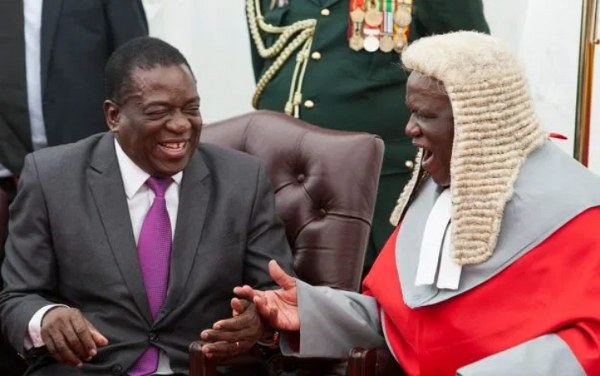 THE courts never denied the opposition MDC-Alliance the right to demonstrate as wrongly presented to the United Nations but those allegations should be read as a deliberate attempt to malign the judiciary and to score cheap political points, Chief Justice Luke Malaba has said.

Briefing the United Nations Special Rapporteur on the right to freedom of peaceful assembly and association Mr Clement Voule last week, the judiciary boss said the MDC-A lawyers approached the wrong court with an appeal against the decision of the police to ban their planned demonstrations last month, citing security concerns.

Mr Voule met the head of the Judiciary with a view to seek an explanation on a number of allegations including claims that the judiciary had denied people the right to demonstrate.

He also sought to hear the judiciary’s comments on allegations that it was not independent and that it was pro-Executive.

Last month, the police exercised its powers in terms of the law and issued a prohibitive order against the planned MDC-A demonstration citing security issues.

Instead of appealing the decision at the Magistrates’ Court in terms of a valid law, the lawyers approached the High Court.

Chief Justice Malaba said politics was at play and that the manner in which the decision of the High Court was packaged for the media, was meant to create wrong perceptions about the court and the nation at large.

“If a police officer makes an order prohibiting a party to demonstrate in terms of a valid law and that law says you appeal to the Magistrates’ Court, that is the right provided by the law. An appeal is voluntary. We do not bind people to appeal. If you are not happy with the order restricting you when you want to march, you can simply go to the Magistrates’ Court,” he said.

“You know what they did? They went to the High Court. Surely you can see that someone could have deliberately done that to create the basis for this kind of opinionated perception.

“If the High Court says it does not have jurisdiction because there is no law which allows one to appeal to it, the applicant would have done harm to his or her own case,” said Chief Justice Malaba.

The Chief Justice said media reports were then packaged in a manner that maligned the court and created a perception that the court does not respect freedom of expression and assembly.

“If the High Court makes such a ruling, it has no control over the media or other channels used to now malign it.

“Now the picture is created that the courts are denying people the right to demonstrate. No one accepts the fault of their own lawyers or themselves because it is deliberate.

“We have no means of defending ourselves and setting the record straight that the argument is all political.

“It is a political argument. It is not judicial. Publicity of that and how it is packaged, is all political. We don’t get involved in politics because we are not politicians,” said Chief Justice Malaba.

Such wrong perceptions, the Chief Justice said, are then turned into facts. “Expressions of disquiet by some individual politicians are turned into facts because of the very environment in which we live.

“We have a situation whereby the first one to present an opinion to whoever he presents it to, influences the approach or perception. In this respect, because the Judiciary is the least vocal, it is just attacked without any defence,” he said.

Chief Justice Malaba said the police also act in terms of the law, which is valid.

“When you look at the current law, whether that law is unconstitutional or constitutional, it is a matter which needs to be looked at against the Constitution.

“But that law exists for now. It’s a matter which the Judiciary at a higher level like Constitutional Court, can only review, provided the cases are brought before it,” he said.

Chief Justice Malaba added that people make noise about alleged unconstitutionality of the law empowering police to issue prohibition orders but they never challenge it in court.

“People take that disagreement and saying the law violates the rights but they don’t come to the Constitutional Court.

“Most of these cases have not come to the Constitutional Court. They have ended at implementation level. Lawyers decide to challenge the procedure only, and not the constitutionality of the law. The court cannot interfere with the exercise of the Executive’s mandate,” he said.