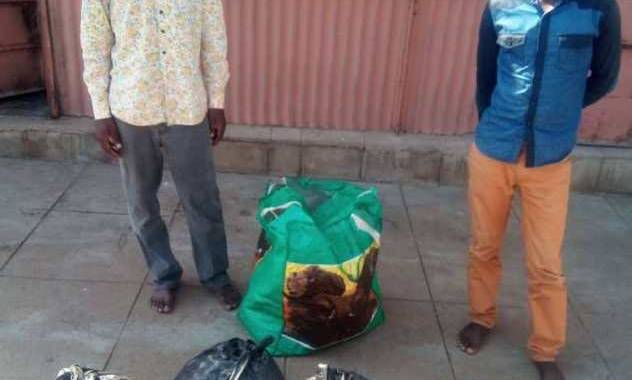 POLICE in Chipinge have arrested two brothers who were in possession of 16kgs of dagga which they were busy sorting and selling at their homestead in Checheche Growth Point.

The siblings, Luke (30) and Truelove Mtetwa (44) of Number 74 Checheche are facing charges of unlawfully dealing in dangerous drugs as defined in Section 156(1)(a) of the Criminal Law Codification and Reform Act Chapter 9.23.

Circumstances to the case were that on October 4 at around 7am detectives who were on patrol around the area picked information to the effect that the accused persons were dealing in dangerous drugs at their homestead.

The detectives went close to the suspects’ residence and made static surveillance.

They then observed that people were making random visits at the homestead.

This gave suspicion that the visitors were buying dangerous drugs as per the received tip off.

Detectives raided the homestead and then carried out a search at the home. They found dagga stashed in black plastic paper bags and some spread on the floor.

Luke was subsequently arrested and the dagga was taken as exhibit.

While detectives were still at the accused persons’ homestead, Truelove who is Luke’s brother arrived and claimed ownership of the recovered dagga.

He was also arrested.

During investigations detectives learnt that the two brothers were using the porous international border between Mozambique and Zimbabwe to traffic the dagga into the country.

The recovered dagga was weighed at Checheche Zimpost and it measured 16,2kgs.

They are expected to appear in court soon.

Horror scenes as dumped man stabs ex girlfriend to death in front of her...

News Sekai Moyo - 29 November 2021 0
THE Zimbabwe Republic Police (ZRP) has launched a manhunt for a local man for murder which occurred in Chiredzi, where he stabbed his ex-lover...

Gambler axed to death by sore loser after winning a cellphone

News Muza Mpofu - 29 November 2021 0
A 41-year-old Shurugwi man died after being attacked by a sore loser who wanted to recover a mobile phone he lost gambling. Dingilizwe Dzingai had...

News Sekai Moyo - 29 November 2021 0
Ten illegal immigrants from Ethiopia have been arrested in Kariba after crossing into the country through the lower part of the Zambezi River. The Ethiopian...

JUST IN: 3 passengers injured as gunmen attack cross-border bus & get away with...

Where can I currently get the best betting bonus at US online betting providers?

Sports Lloyd Sibindi - 29 November 2021 0
In the US, sports betting has grown in popularity. In practically every city in the country, there is a well-equipped betting store. You can...

Technology Tanya Mugabe - 29 November 2021 0
Even if online gambling is now recognized, it does not mean that it is safe. The number of players who are still afraid is...

This is how environmentally friendly energy generation succeeds

Blog Cynthia Goba - 29 November 2021 0
Environmentally friendly energy generation can be done through many ways. It had been the case for a long time that people had used fossil...