GOVERNMENT has seized an Isuzu Double Cab vehicle, which it allocated to Chief Mupungu of Chipinge after it emerged that he sold it to a Chipinge man hardly two years after receiving it.

The law stipulates that a chief is not allowed to sell the vehicle five years before the time they received it. President Emmerson Mnangagwa handed over 90 new cars to traditional leaders in August last year.

Manicaland provincial administrator, Edgars Seenza, yesterday confirmed the development and said a reversal of the deal was underway.

Sources close to the development reveal that, as part of the deal, Chief Mupungu (Happyson Nxumalo) received a Toyota ToyoAce and $US4 000. The Isuzu Double cab has a market value of over US$50 000.

An affidavit dated October 9, which The Manica Post is in possession of, states that Chief Mupungu entered into an agreement with one Dzidzai Butau in exchange with a Toyota ToyoAce 1 tonne vehicle and US$4 000.

(I, Happyson Nxumalo Mpungu of Makoho Primary School Box 185 Checheche, sold my car Isuzu KB 250 registration number, AFC 3164 to Dzidzai Butau, who in return gave me a Toyota ToyoAce and an amount of US$4 000 which he paid in full.)

Said Mr Seenza: “It is the position of the Government that the car should not be sold before a stipulated time. The vehicle is still Government’s property and that deal is a nullity.

“I cannot get into finer details but I can confirm that the reversal of the process is underway.” 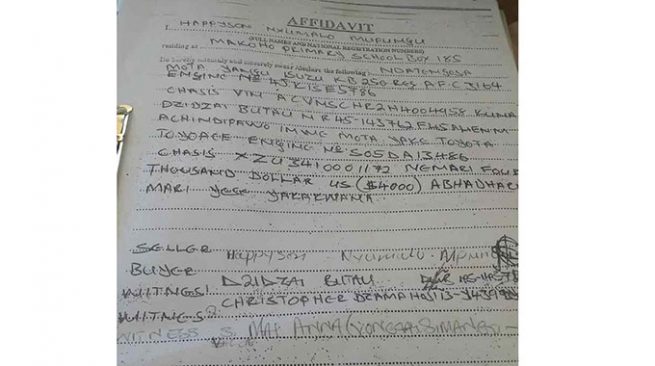