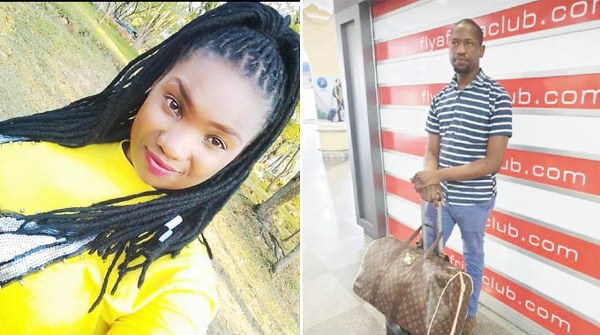 The lady whose boyfriend committed suicide at her doorstep following a dispute, has broken her silence giving a detailed account of what transpired on the night.

It is suspected that Byron Nyevera hanged himself at his lover, Nothando Hlongwane’s gate in Mbizo 8 in Kwekwe and his body was found on Monday morning.

While the family accepted the news of Byron taking his own life with a pinch of salt, they said they were not ruling out foul play. Hlongwane who has been seeing the deceased for more than a year, said on the night, the two had an argument after he received a call from another girl.

“He visited at my friend’s place in Mbizo 8 where I am currently staying. He received a call from a girl called Ivy who asked him to visit her.

This angered me as he had the audacity to talk to another girl in my presence,” revealed Hlongwane.

Out of anger, she then ordered Byron to leave the house and go to where he was being called.

“He begged me to stay but I refused. He told me he would rather die as he loved me but I just thought he was joking. Because I was angry, I continued chucking him out of the house,” she said, fighting back tears.

Byron sent messages to Hlongwane informing her that he was hanging himself, but she didn’t buy it.

“He started sending messages threatening to hang himself. He told me he loved me so much but what I had done to him had left him with no option.

I slept hoping that by the next day I would have recovered but little did I know that my Byron would be no more,” further narrated Hlongwane.

Asked if she regretted causing Byron’s death, Hlongwane said: “I loved him, I wish I could turn back the hands of time. People always have squabbles but I never knew it would come to this. I was so jealous and I didn’t want to see him with another lady so naturally I was angered.”

She said it was unfortunate that the Nyevera family were angry at her and for that reason she was not attending her lover’s burial.

“It’s unfortunate that the family jumped to conclusions and blamed me for everything. No one gave me the opportunity to give my side of the story.

I would have loved to attend his burial but under the circumstances I can’t,” she said.

Byron was buried yesterday in Kwekwe.