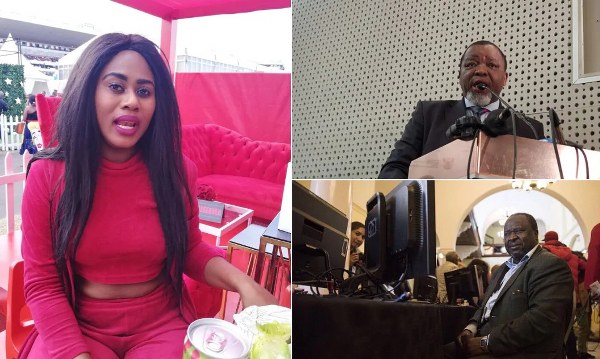 According to the publication, Mantashe “declined” to answer their questions “and instead claimed he previously paid two Sunday World journalists R70,000 in total for the story to go away”.

The story was published as the newspaper’s lead anyway, with Mantashe reportedly saying the journalist who contacted him was the “third person” who wanted to run with it, and that he refused to pay again.

He told the publication that he “begged” for the story not to be written.

Sunday World editor and publisher Makhudu Sefara said he takes Mantashe’s claims very seriously, as they implicate his journalists, saying this kind of thing will not be tolerated and that he wants Mantashe to come forward with names, after which he says there will be “consequences”.

Sordid details of the alleged private lives of Finance Minister Tito Mboweni and Mineral Resources Minister Gwede Mantashe were splashed all over the front page of the Sunday World on Sunday, as the newspaper published details of what was described as a “love-triangle” between the two ministers and “slay queen” Lerato Habiba Makgatho.

The article is accompanied by screenshots of what appear to be Makgatho’s conversations with the ministers.

These include intimate se_xual details of Makgatho’s experience with Mantashe, who she describes as a “tiger in bed”, compared to Mboweni, who is allegedly more conservative, and “wanted us to switch off the lights and cover ourselves”.

In one of the WhatsApp messages, the man identified as Mantashe complains that his relationship with Makgatho “already cost me more than 70K”. He worried that this will soon increase to “100K” after he was asked for more money.

The slay queen’s salacious exchanges with Mantashe are contained in two separate sets of WhatsApp conversations, which Sunday World has seen.

In the first conversation, she raves about Mantashe’s se_xual exploits while the ANC chairman also praises her for being a Kama Sutra in bed. She told Sunday World that Mantashe, who is married, is a “tiger” in bed while Mboweni, who is not married, is a control freak who didn’t last long in bed as Mantashe.

In another set of messages, Makgatho tells Mantashe she wants him. “Baby please,” she writes. He responds by saying: “My relationship with you has already costed [sic] me more than R70k. I am afraid that this time it will cost me R100k.”

In a conversation with Mboweni, she breaks up with the finance minister, because she is no longer happy with him and wants to date other men.

In an exclusive interview with Sunday World on Thursday, Makgatho explained why she has decided to spill the beans now. She wanted the truth of her relationships with the two ministers to come out so that people can stop trying to extort money from the ministers.

The 26-year-old aspiring actress and student said she feels bad for Mantashe because he is a nice person. She said Mantashe blessed her better than Mboweni. “He gave me between R10k and R15k, and Mboweni will only give me R3k once in a long time”.

Mboweni was also not a freak in bed because “he wanted us to switch off the lights and cover ourselves, but Mantashe was a tiger in bed. He even lasted long.” She said Mboweni also insisted on being on top all the time.

Makgatho, who is 26-years-old and described as a “student and aspiring actress”, said that Mantashe was a “better blesser” than Mboweni, with the former giving her amounts of R10,000 and R15,000 at a time, while the latter would “only give me 3K once in a long time”.

Perhaps the finance minister was just being justifiably frugal with his money in these tough economic times.

The Finance Ministry’s chief of staff said Mboweni would not be available to comment today as he’s working on the budget speech, which is, in the minister’s defence, arguably more important than the revelations contained in the Sunday World front-page report.

Mantashe was not reachable for comment when contacted by The Citizen this morning.

It’s important to note that neither minister has been accused of any illegal activity, although this could be more of a scandal for Mantashe, who is married, than for Mboweni, who is not.

News Muza Mpofu - 11 July 2021 0
IN a shocking revelation that has exposed deep rooted corruption at Lupane Provincial Registrar’s Office, a Pakistan national was issued with a Zimbabwean National...

News Muza Mpofu - 11 July 2021 0
President Emmerson Mnangagwa is yet to respond to MDC-T leader Douglas Mwonzora’s proposals for dialogue, a month after the opposition leader said he was...
Loading...