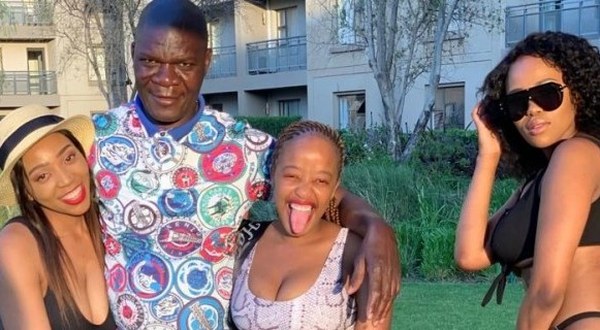 Trending far-from-beauty valiant Roland Muchegwa well-known as Uncle Roland is unshaken by the negative comments on Black twitter and all media platforms as he continues to live large in the Gold Rush lands — South Africa.

AmaBlesser seem to be the in-thing in the modern fast life Uncle Roland has fitted perfectly in South Africa, a nation in which the pretty young yellow bone ladies are desperate for Omalume (men who can take care of their economic needs) as his face is written “blesser” all over.

“You know behind every successful man there are pretty women willing to do anything to secure the bag lol (laugh out loud). It’s normal,” said Uncle Roland.

Roland subscribes to the African proverb which says that the beauty of a man is his cows.

Who is Uncle Roland?

The renowned self-exiled 51-year-old Zimbabwean socialite made his fortunes through fuel deals across the Southern African Development Community (Sadc).

He has made waves with the nearly 30-second video snippet which features two fine looking yellow-bone hotties twice younger than him. The video is the talk of the Southern African region.

“I’ve big contracts in fuel distribution in Zimbabwe and Sadc, I am a miner too and an owner of a big club in Cape Town here in South Africa,” he said.

The Amapiano song Akulaleki — Samthing Soweto which was the background song in the video is a perfect portrayal of the rich man’s lifestyle which insinuates “let’s go and party today”.

The public might be wondering how Uncle Roland got all this fame, yeah right! Well, B-Metro Showbiz managed to contact the kingpin.

“I never saw it coming that someday I will be every household talk. It all started as cyber bullying on Facebook, name calling and insults, then Twitter family turned it into fame.

“I’m humbled as I get celebrity reception everywhere I go,” said Uncle Roland.

The trend-setter hinted on featuring on South Africa finest vixen video in a twitter post and when asked about this, he gave the following account: “A big artiste in SA asked me to appear in his coming music video, it’s going to be lit,” he affirmed.

The socialite is living large and with all the fame through the viral video, Akulaleki hit-maker, Samthing Soweto could be the one offering Uncle Roland the chance to feature in the official song video which has already made him legendary.

Ask Auntie Sekai Moyo - 28 September 2020 0
Dear Aunty Lisa I am married to a man who never goes beyond three minutes during se_x and yet he argues that that is a...
Loading...