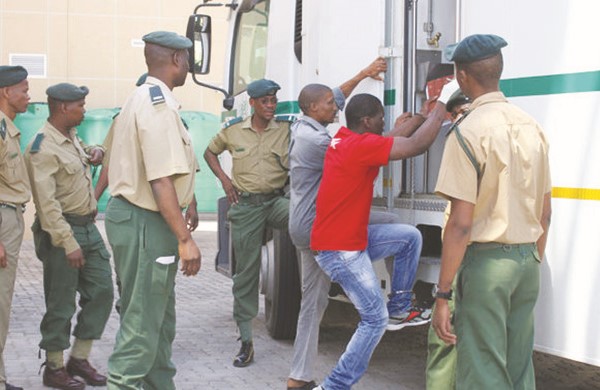 POLICE in Botswana have since January this year arrested more than 4 000 Zimbabweans for attempting to illegally cross into the neighbouring country.

The border jumpers, 2 479 men, 1 521 women and children were intercepted at the border while attempting to cross into Botswana.

He said border jumping posed a security threat to both countries hence the need to fight it from both ends.

The campaign ran under the theme “Join hands in fighting crimes of passion.”

“The most problematic issue in Botswana is illegal border crossing. Betweeen January and September this year, statistics show that we arrested 4 387 Zimbabwean nationals crossing into Botswana through border jumping. Out of this total number 2 479 are males and the remaining comprise of both women and children,” said Asst Supt Ponyane.

He urged members of the public to obtain the required travel documents to avoid arrests.

Botswana together with the ZRP are carrying out border crime meetings and patrols along the border to combat incidents of border jumping.

Ass Supt Ponyane said through the patrols they have not only addressed border jumping issues but have managed to recover smuggled goods.

“We have forums where the two countries meet to discuss issues of cross border crime. In our meetings we also share information regarding the arrest and release of criminals both in Botswana and Zimbabwe. After sharing information on criminal issues, we set aside days when we conduct patrols along the border. Through these exercises we managed to recover property that was smuggled into Botswana. In one incident I understand it was a case where dagga was smuggled into our country,” he said.

“Let me confirm that so far we are enjoying a good working relationship with the ZRP. I want to appeal to all Zimbabwean citizens to join hands with the ZRP to fight crime along our borders particularly illegal border crossing and smuggling of goods. We must work together for the betterment of our two countries and ensure our borders are safe”.

In a speech read on his behalf by the Member of Parliament for Mangwe Constituency Cde Hlalani Mguni, Minister Ndlovu expressed concern over the increase in cases of crime in the area, saying it has destroyed the spirit of ubuntu.

Police in Plumtree continue to record crimes such as rape, robbery, murder, assaults and unlawful entry and theft.

“Our crime situation is not good in Plumtree. Our statistics reflect an upward trend in cases of crime. Between January and December 2018 we recorded a total of 771 cases compared to 1 124 cases recorded between January and September this year reflecting a huge increase,” he said.

Minister Ndlovu said most of the perpetrators were deportees and measures should be taken to ensure their movement is monitored.

“Some of the crimes are committed by our deportee brothers and sisters who are desperate to raise money to take them to their destinations. Authorities will continue to gather intelligence through stakeholder liaison to ensure that when deportees are released their movement is monitored,” he said.