Mystery surrounds the death of a middle-aged Norton man whose body was retrieved from a well at his family home in Katanga’s Ward 7, Norton on Saturday.

According to some sources, 27-year-old Norbert Jongwe (Jnr) only returned from a long sojourn to South Africa on Friday and he did not last 24 hours in Zimbabwe. 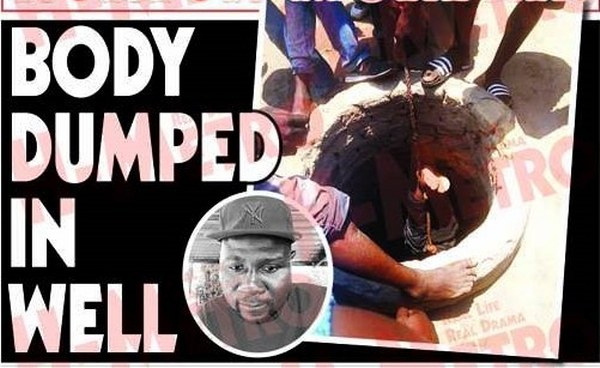 It is said that his father, Norbert Jongwe, 62, known in the locality as Mzambiya, was in the process of fetching water from his well for his small in-house poultry project, when he noticed that the tin was unable to scoop any water.

He decided to peep inside the well and caught the horrific sight at the bottom.

Norton police officers were swiftly alerted and they retrieved the body as a shocked crowd watched. What appeared to be two stab wounds on the stomach of the corpse heightened speculation of foul play.

While police officers at the scene could not speak to the media, the elder Jongwe told neighbours that his youngest son arrived home on Friday afternoon, having left for South Africa in 2015. He spent most of his time in the company of a teenage relative. The deceased told his father that he had plans of buying some livestock and that he had brought some goods from South Africa which would arrive a few days later.

So far, no one knows, at least in public, what transpired on Friday night at House No. 305, Katanga.

Whatever it is, it resulted in a young man losing his life just a few hours after re-uniting with his kith-and-kin for the first time in four years.

News Cynthia Goba - 3 December 2020 0
Zimbabwean muso Jah Prayzah has been in the firing line. Remember the Hopewell Chin'ono saga? The singer has taken the time to reply to Moana's...
Loading...