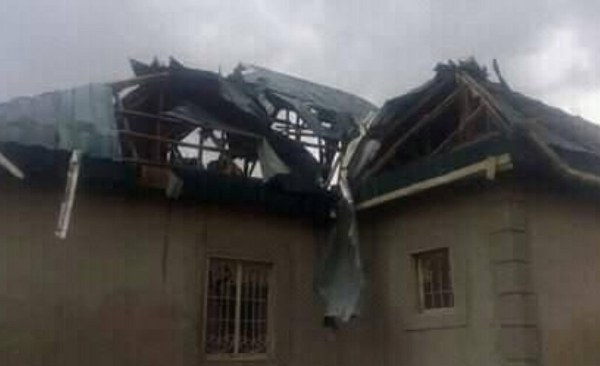 A SEVEN-year-old boy died while his mother and sibling were injured after they were struck by objects during a rain storm at Komba Primary School in Lupane.

The storm, which lasted about seven minutes on Sunday afternoon, destroyed 21 homesteads in Gudubu Village, according to information gathered by the District Civil Protection Unit which visited the school yesterday morning.

The extent of damage in the villages was not given.

At the school, seven classroom blocks and three teachers’ cottages had their roofs blown off while windowpanes were shattered.

The perimeter fence and blocks of toilets were also destroyed after huge trees fell on them.

The deceased boy has been identified as Mbekezeli Nleya who was doing Grade 1 at the school.

He was allegedly struck by an object as he and his mother Ms Portia Mafu, an Early Childhood Development teacher and Pertunia Dube a Form 2 pupil at the nearby Vulindlela Secondary, fled from the house they were in after its roof was blown away.

Ms Dube and her two children decided to run to a nearby toilet and Mbekezeli was hit by an object from the veranda and died on the spot.

His mother only noticed after the storm that her son had died as he lay in a pool of water and blood.

Ms Dube and Pertunia were rushed to St Luke’s Hospital where they were admitted.

“It’s a sad situation that befell the school. We had to go there as stakeholders to do an assessment and there is a need for intervention,” she said.

“We need to assess the extent of damage in terms of its value and as CPU we will update the provincial CPU which will convey the report to the national CPU as we also have to engage stakeholders for assistance.”

Almost all roofing sheets from the classroom blocks, windowpanes, books, and furniture were destroyed.

The toilets and the school’s solar system were destroyed.

World Vision will transport the bereaved family and the deceased’s body from St Luke’s Hospital for burial.

Meanwhile, Sengezane Primary School in Gwanda had one of its classroom blocks damaged by rains accompanied by strong winds on Monday.

Gwanda District Co-ordinator, who is also the chairperson of the Gwanda Civil Protection Unit Committee, Ms Kiliboni Ndou, confirmed the incident which occurred on Monday afternoon. She said no injuries had been recorded on the incident.

Ms Ndou said investigations were underway to ascertain whether there were other institutions and homesteads in the district that had also been affected.

“We have received a report on a school, Sengezane Primary School in Ward 14 in Gwanda which was damaged by rains on Monday afternoon. The school had one of its classroom block roof blown away and luckily no injuries were recorded.

“So far we have received a report on destruction at Sengezane Primary. If there are other institutions or homesteads that were also damaged, we are yet to receive reports on them. We are yet to deploy a team on the ground to assess the extent of damage,” she said.

Ms Ndou said the CPU committee started conducting disaster risk reduction campaigns in October in various wards to prepare communities for the rainy season and disasters which come with it. She said these awareness campaigns were still in progress and they were also going to be conducted in schools and clinics as those were institutions that were often damaged during the rainy season.

“We stared conducting awareness campaigns in October at the onset of the rainy season to educate communities on the possible hazards and how to react to them. We have been taking advantage of community gatherings and meetings to educate people.

“As the CPU committee we are set to hold sensitisation meetings this week with schools, farmers, health centres and councillors. We want people to be on alert and well informed on what to do in case of disasters. We also want to promote an early reporting culture among people,” she said.

Ms Ndou said the committee was set to create a Whatsapp platform which will have community leaders, traditional leaders, heads of schools, clinic staff, business people and other influential people so that reports of disasters from village level would be recorded as early as possible in order to ensure quick responses.

Matabeleland South Provincial Education Director, Mr Lifias Masukume, said his office had not received any reports of other schools that have been damaged in the province besides Sengezana Primary School.

‘My girlfriend makes too much noise during se_x, her screams are loud enough to...

News Muza Mpofu - 14 April 2021 0
A human lower limb with a foot wearing a sneaker has been found floating in the waters along the Gweru River, police have said. Midlands...

Drama as mahobho catches man red-handed groaning in pleasure having se_x with goat near...

News Muza Mpofu - 14 April 2021 0
A HERDSMAN who could not contain his se_xual urge has landed himself in court for bestiality. Forget Ngwenya (19) of Nyabira appeared before Chinhoyi magistrate...

News Muza Mpofu - 14 April 2021 0
LUFUNO Mavhungu was bullied by another pupil on Monday, 12 April and the incident was caught on camera. Sadly, police confirmed that the grade 10...

Drama as bootylicious woman turns out to be a ‘snake’ 4 weeks after moving...

News Muza Mpofu - 14 April 2021 0
FOR Tshepo Baloyi (37), it was love at first sight. He was so into his new curvy girlfriend that he accepted her and her one-year-old...

Lula lula every night: Goblin pulls a shocker after being chased away from church...

News Tshuma Rueben - 14 April 2021 0
ONE BY one, through prayer, the prophet claimed he had chased the tokoloshe away from the congregants. He even sprinkled holy water on everybody in...

News Tanya Mugabe - 14 April 2021 0
MDC-T which is led by Douglas Mwonzora has nominated Gweru Urban legislator Brian Dube to be the chairperson of the Public Accounts Committee in...
Loading...