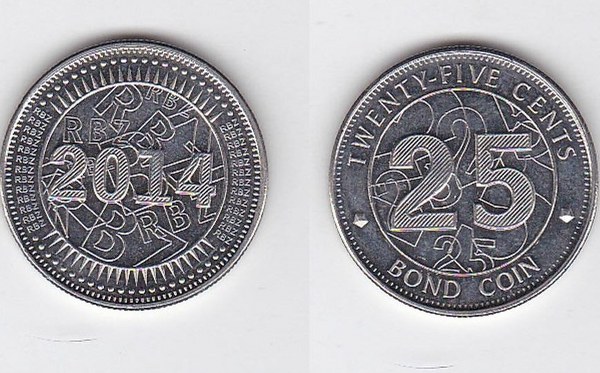 THE introduction of the new currency has triggered the resentment of the ZWL$0,25 cents bond coins by retailers, Zim Morning Post has learnt.

Attempting to purchase goods and services using a ZWL$0, 25 cents bond coin has become a nightmare for consumers.

This comes as informal traders and transport operators in Zimbabwe’s capital are declining to accept the coins as legal tender.

Zimbabwe’s skewed arrangement is such that cash is the preferred method of transacting in an economy where the majority of citizens earn a living from trading in the informal sector.

Sten Zvorwadza, National Vendors Union Zimbabwe (NAVUZ), Chairperson said it has become a common place for Zimbabweans to apply speculative assumptions on the use of small denominated coins.

“This has happened numerous times in the past and the government has failed to give proper direction when it happens,” Zvorwadza said.

“It is the duty of government to explain to the nation that such behaviour is unscrupulous and unacceptable.

“The news on the introduction of the new Zimbabwe currency has also fuelled the high levels of speculation leading to declare the 25 cent coins unacceptable in trade. The other emerging reason is that inflation has rendered the 25 cent coins valueless and accepting them is adding an unnecessary burden of counting valueless coins.

“Informal traders are highly sensitive when it comes to information and they react that way to mitigate against risk of collecting coins that would otherwise be valueless in the short or medium term. The role of government is to put the record straight by casting the true position of the coins being rejected as a measure to protect the vulnerable informal traders.”

Reserve Bank of Zimbabwe has introduced new ZWL$2 and ZWL$5 dollar notes to increase the amount of physical cash in the economy to meet transactional demand.

The notes will be an addition to the already circulating bond notes.

This comes as current proportion of cash to broad money supply of 4 percent is low compared to the regional and international levels of 10 – 15 percent.

This low ratio has resulted in an undesirable cash premium which the RBZ would like to see eliminated.

“The Committee felt that there was need to boost the domestic availability of cash for transactional purposes through a gradual increase in cash supply over the next six months,” RBZ governor John Magudya said after the central bank Monetary Policy Committee met on October 28 and 29 at the bank chambers.

“The Committee also noted the need to review upwards the cash withdrawal limits to ease the burden on the transacting public. The additional cash injection will be carried out through the non-inflationary exchange of RTGS money for physical cash.”

A snap survey carried out by Zim Morning Post on Wednesday, established that retailers, vendors and commuter omnibus operators are not accepting the 25 cents bond coins.

“We do not take this,mazuda.

“Go and give your children to play with,” said one vendor operating along Harare street.