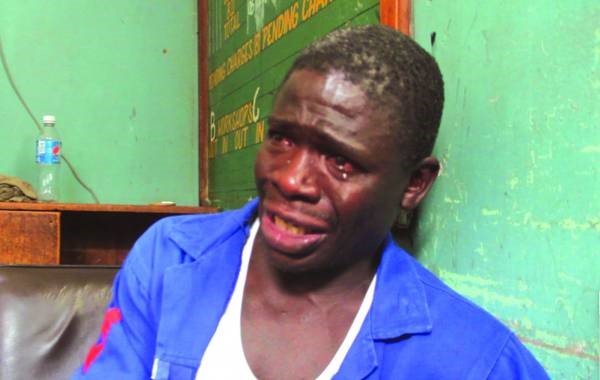 During the day, he looks like any other inmate at his new home — Harare Central Prison, but when the lights go out, he knows no peace.

That was after he got into a fight over a girl, resulting in him brutally stabbing and killing his schoolmate.

Memories of the day he butchered his friend before handing himself over to the police are still fresh in his mind.

Serving a life sentence with hard labour is excruciating, but for Siwela it is worse as he claims to be tormented by an avenging spirit.

He says almost every night for the past 21 years, he has had to be woken up by his cellmates who say he throws punches, screams and argues with unseen forces in his sleep.

Siwela says he constantly has violent nightmares, and images of the murder he committed back in 1998 also flash in his sleep.

Since his incarceration, Siwela feels that something needs to be done spiritually. He says his family and that of the victim need to perform some ritual.

“When my father visited me sometime in 1999, I tried to raise the issue with him but he said ‘you are still too young, you will not understand this’. I had just turned 20 then,” recalls Siwela.

However, according to Siwela’s father Sahluko, that door has since been closed. This is because another tragedy hit the family of Siwela’s victim a few months after his incarceration.

“Barely three months after Joram’s incident, a lot happened in the victim’s family, thereby complicating everything. The victim’s father and sibling were also murdered.

“Another uncle, whom they lived with, vanished without a trace. Since then, we have failed to locate any other relatives.

“I feel that knowing all this will be too much of a burden for Joram, which is why I have never been able to tell him,” said Sahluko.

He said he still hopes to see his son free one day.

Now 21 years later, Siwela’s parents are old and frail — unable to visit him. Siwela now fears that his parents will die before helping him out of his situation.

“They are both old now and cannot visit, especially using public transport. I wish there was a way.

“I need to talk to them. There is so much they need to help me understand,” said Siwela with tears rolling down his face.

He says he feels that his parents have not fully forgiven him. His hope is that one day he will be able to do something for them.

Siwela still has fresh memories of his last court session. He vividly remembers the disappointment he saw on his parents’ faces when he was convicted.

“It was a Wednesday afternoon. I felt dizzy and asked the judge to allow me to sit down as my sentence was being read. I feared a death penalty.

“I was sweating profusely, my knees shaking and as they announced my sentence, I felt the world crumbling around me.”

The words of a police officer, instructing him to bid farewell to his parents, still ring in his ears.

He remembers too, his father’s last words that day: “. . . prison is now your life but I will come and visit you, I cannot talk right now.”

In a world where mysteries abound, will Siwela ever get disentangled from the spiritual prison that has haunted his sleep for over 20 years?

PLEASE TELL US WHAT YOU THINK IN THE COMMENTS SECTION BELOW!