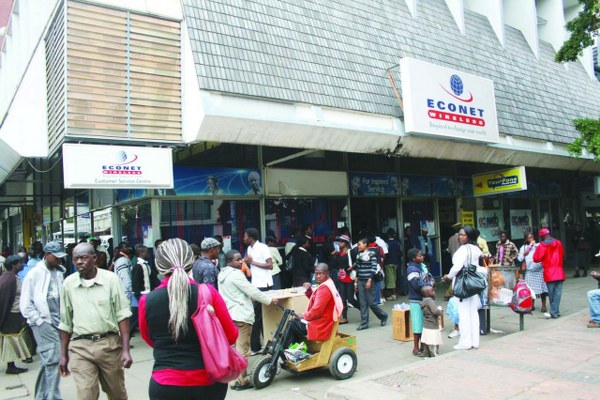 The Econet Wireless Shop where a Guard Alert security guard committed suicide after he shot himself in the head over stolen cell phones has temporarily closed, as investigations into the case continue.
The shooting incident occurred at around 5pm yesterday at the shop which is at the intersection of First Street and George Silundika Avenue. When the Herald visited the shop in the morning, the doors to the shop had been closed while they were also written notices informing the public to use their other branches.
Heavy police deployments were also outside the shop conducting a crackdown on vendors that also operate near the area. There were no vendors at the scene and the Herald witnessed more than six of them being arrested and taken away. On Tuesday, sources said the security guard was questioned by Econet officials over some cell phones that recently went missing.
National police spokesperson Assistant Commissioner Paul Nyathi confirmed the incident.
“We confirm that a security guard manning at an Econet shop shot himself in the toilet yesterday afternoon. Allegations on the issue are that when the deceased reported for work in the morning, he was alone in the building and he stole some cell phones and hid them.
“At the end of the day, the management decided to make a review on the recorded footage captured by CCTV, that is when they discovered the deceased had stolen the gadgets.”
He said the management confronted the security guard, who during the questioning excused himself saying he wanted to visit the toilet.
“During the questioning, it is alleged that he excused himself saying he wanted to go to relieve himself, he went upstairs and shot himself in the head inside the toilet,” Asst Comm Nyathi said.
He said it was unfortunate that a life has been lost in such circumstances and appealed to members of the public to desist from engaging into criminal activities which only result in unfortunate incidences.
— Herald
Follow @MyZimbabweNews