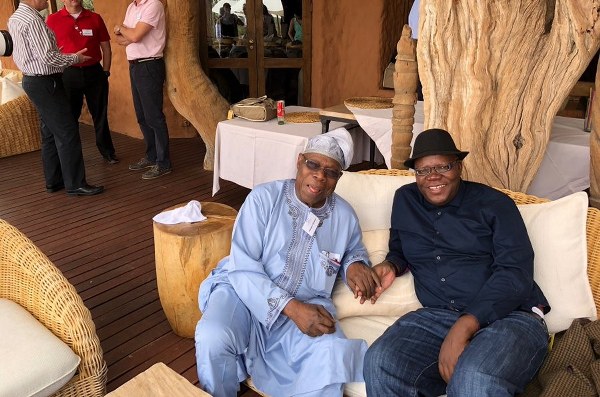 The Nigerian statesman, who is also a close friend of MDC vice-president Tendai Biti, said his meeting with Mnangagwa discussed issues to do with political stability and predictability, which was central and key to investment.

“Of course, as you know, political stability and security and predictability are the conditions for healthy economic development and investment, both foreign and domestic,” he said.

“We cannot be talking of development and progress without talking about all the things that must do with the political stability, security, predictability and all the aspects of fundamental basic things that must be the conditions of investment and thriving economy.”

In 2005, the government moved to seize vast tracts of land owned by the Oppenheimers, a wealthy family which, among their portfolios, is the famous diamond company, De Beers.

The roping in of Obasanjo, who arrived in the Oppenheimers’ private jet yesterday morning, raised speculation that he was brooking a safety net and protection of their business interests in the country, among them ranches.

Obasanjo, however, said the Oppenheimers were not really concerned over their investments, but instead, were looking for new investment opportunities.

“And then I also have along with me some people who have interest in investment here in Zimbabwe and that is also part of what we have come for, because you cannot talk of development of a country without investment, domestic investment and foreign investment,” he said.

Former De Beers chairperson, Nick Oppenheimer, could not immediately commit to new investments in the country, preferring to say the future would tell.

“It’s too early, the future will tell, but I would like to make an investment in Zimbabwe, I am a good friend of Zimbabwe,” he said.