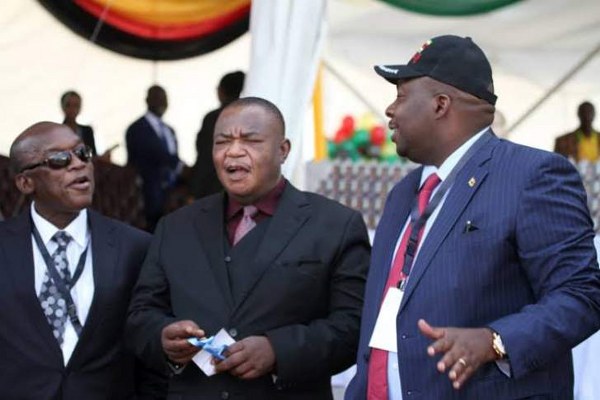 Saviour Kasukuwere has declared his intention to run for president in 2023, despite being exiled.

The former Zanu PF political commissar and a key member of the late president Robert Mugabe’s Cabinet before being ousted in a 2017 military coup says he is “ready to take the bull by its horns.”

A social media campaign with the hashtag #TysonWabantu has simmered for weeks, and Kasukuwere – also known by his nickname Tyson – had so far avoided commenting on the clamour from dedicated supporters to announce his return to politics.

On Sunday, Kasukuwere removed all doubt about his intentions when he told The Sunday Times of his bid to challenge for higher office.

“People want me to be the leader in leadership renewal, particularly the young people,” the 49-year-old told the newspaper from South Africa, where he now lives in exile fearing political persecution back home.

“People know that I stood by Mugabe. As former Zanu PF commissar, I’m deeply respected within and beyond Zimbabwe. I interacted with former South African presidents Thabo Mbeki and Jacob Zuma. They know me. I have links with business people with regional interests too.”

Kasukuwere’s political manoeuvres will be watched closely by the Zanu PF party which is still reeling from divisions caused by the military’s intervention that removed Mugabe in a conspiracy with Emmerson Mnangagwa, now the president.

Zanu PF activists have been targeting Kasukuwere for weeks as the #TysonWabantu internet campaign raged, even labelling the former local government minister a “national security threat.”

Kasukuwere claims to enjoy the support of international “friends of Mugabe” – most of them high-ranking politicians and influential businessmen unhappy over the way he was removed from power.

In Zanu PF, Kasukuwere was a key member of a faction known as the G40 – made up of Mugabe loyalists including the former president’s wife, Grace.

Kasukuwere’s spokesperson Ntokozo Msipa said his 10 years in Mugabe’s Cabinet meant that “he now knows the mistakes that need to be corrected.”

“There’s a need to find a solution to the tough economic and political experiences,” she told the Sunday Times.

“The youth comprise about 60 percent of the total population, and we have been subjected to much suffering.”

But Mnangagwa has already publicly betrayed discomfort at the possibility of Mugabe’s former loyalists mobilising from inside Zanu PF.

Kasukuwere has not said how he will run a campaign from exile. Some speculate that he is Vice President Constantino Chiwenga’s stalking horse in a conspiracy involving the military to stop Mnangagwa from running for a second term.

Professor Philani Moyo, the director of the Institute of Social and Economic Research at the University of Fort Hare, said it was understandable that voters would consider an alternative to Zanu PF and the MDC, but he does not believe Kasukuwere is the change agent the country needs.

“Had his faction won the Zanu PF power struggle, he would have been one of those to continue Mugabe’s bad legacy. Now that he’s in the cold, he has an affinity for power again, so the only way for him and his allies is to try to charm the masses. But that will not work,” Prof Moyo said.