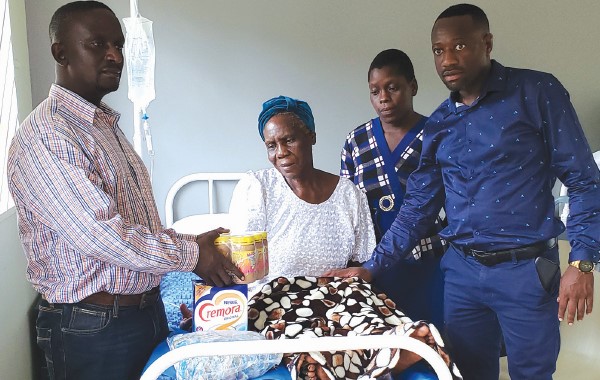 Veteran actress Rhoda Mtembe, popularly known as Mai Sorobhi in yesteryear drama “Paraffin”, who suffered a stroke early this year, got a shot in the arm when a well-wisher donated foodstuffs and facilitated physiotherapy sessions for her.

Mai Sorobhi is now handicapped and can hardly walk. After the stroke, Mai Sorobhi made an appeal to get physiotherapy assistance so that she could regain her movement abilities andpursue a dream to revive her acting career. Last week, Mai Sorobhi received groceries and physiotherapy session assistance from well-wishers who felt it was necessary to help the veteran actress pursue her dream.

Group Chief Executive Officer for Nduhukire Holdings and Mathiaga Auctioneers Dr Thomas Rashamira said giving back to the community was part of their social corporate responsibility.

“We heard Mai Sorobhi’s plea and we were touched. We decided to provide foodstuffs for her so that her daughter won’t have to do everything on her own,” Dr Rashamira said.

“We have given her foodstuffs; we are also working on providing her with physiotherapy sessions from time to time.”

“We understand how it feels like when one cannot provide for themself.”

“During our teenage years we would go to the grocery stores in the rural area to watch Mai Sorobhi on television,” said Dr Rashamira.

“We would not move an inch while watching her drama, she was so good and she inspired us very much.”

Mai Sorobhi said she was grateful for the kind gesture and that it would go a long way.

“People are really coming through to help me and I am grateful, I never thought Zimbabweans would do such for me,” she said.

“I have been struggling to get food, but I am sure the groceries that I have received will go a long way.”

Mai Sorobhi said her health was gradually deteriorating. “Sometimes I feel fine, but sometimes it’s really hard. At the moment my blood pressure has been high and I need physiotherapy sessions at least twice a month, but I have only done one session,” she narrated.

In the drama series “Paraffin”, Mai Sorobhi was wife to Paraffin, played by the late hilarious Phillip Mushangwe.