A ZIMBABWEAN man is on the run after he allegedly killed his wife and stashed the body for four days under the bed while living in with his three-year-old child in Pretoria, South Africa.

Reports say the fugitive Kuziva Tsvito from Dangamvura in Mutare allegedly killed his wife Netsai Makore, 33, two weeks ago and wrapped the body with dustbin plastics before stashing it under the bed. 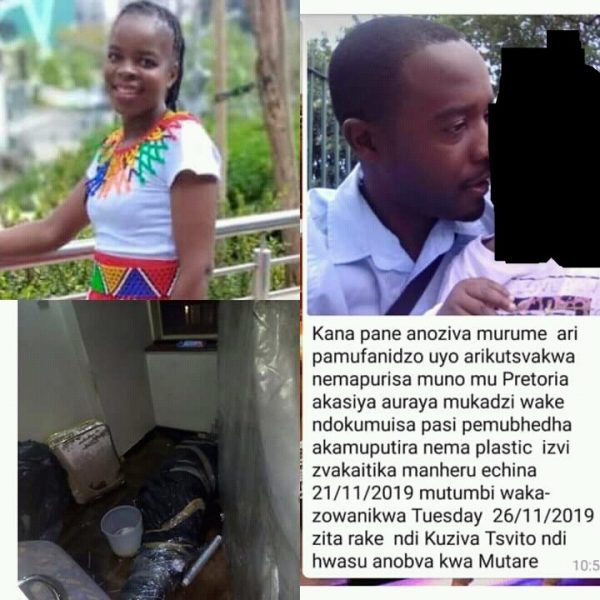 Tsvito stayed in the room with his three-year-old daughter as well as the decomposing body.

Makore’s body was discovered on the fourth day.

H-Metro has learnt from South African Police Service’s (SAPS) officer (name withheld) handling the case that Tsvito killed his wife after suspecting her of cheating then transferred money from his now deceased wife’s account into his account.

A sister to the deceased who lived within the neighborhood in Pretoria noticed an unusual pattern as she was no longer seeing her sister taking their child to school.

She further went to the house where she was led by the stink from the decomposing body which led her to discover the body stashed under the bed before alerting the SAPS.

Brother to the deceased Joseph Makore said he found his sister wrapped in plastics and is appealing for the whereabouts of Tsvito.

“That is my sister wandakasiira, it happened Thursday night or Friday morning akagara naye four days achirara mumba nemwana on top of the bed then we discovered it on Tuesday; anyone anoziva kwaari call me,” said Makore.

Makore said Tsvito would clean fluid coming from the corpse using a cloth and a bucket to keep the stink away.

Makore told H-Metro that his sister Netsai is yet to be buried.

Some sources said the two used to fight a lot as Tsvito was taking Netsai’s belongings to his girlfriends.

One Cresencia Christine Sipono wrote on Facebook that Tsvito was well known for flirting with married women and asking out girls in the streets.

The three year child is now under the custody of Makore family while Tsvito is said to be still on the run.

Meanwhile SAPS, liaising with Interpol, have spread the net to arrest him for murder.