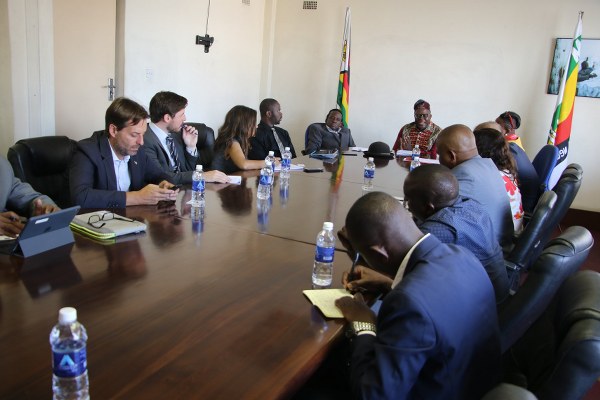 INFORMATION, Publicity and Broadcasting Services deputy minister Energy Mutodi yesterday said government would not hesitate to send to jail “criminals” like MDC leader Nelson Chamisa who are instigating for the removal of government through protests and civic disobedience.

His comments followed threats of protests by the opposition over the deteriorating situation in the country.

“If anyone wants to take the law into their own hands and engage in such activities so as to discredit the government, the law will take its course and criminals will be jailed, even if they are leaders of political parties or whatever,” Mutodi said in apparent reference to the MDC leader, whose party has announced plans for what it terms the “final push”.

But Chamisa said he would remain unfazed despite the threats on his life and/or arrest.

“These threats are becoming too common and the people issuing them are just common criminals who have no interest of our country at heart,” Chamisa’s spokesperson Nkululeko Sibanda said.

“Their irresponsibility is a direct result of their incapacitation and we simply must ignore such naivety. You must remember that after ED’s (Mnangagwa) blue-eyed boys attempted to shoot the president (Chamisa), we have not received calls from the ministers, the police or anybody to try and explain the situation and that is an act of complete irresponsibility.”

He said Chamisa was “a national asset” and a threat on his life could not be treated like something normal.

“It is a threat to the security of our country because we are talking about the people’s president. When they shot at him on Sunday, it was the people of Marondera that said, ‘president, this issue must not end here. We can’t stop doing the right thing because the Zanu PF police will disrupt’,” Sibanda said.

“They said let us move on. It is not just the president who is unstoppable. Taking from Marondera, it is the people of Zimbabwe that are no longer stoppable.”

Meanwhile, MDC vice-president Tendai Biti yesterday met with diplomats accredited to Zimbabwe to brief them on the situation in the country and what transpired in Marondera on Sunday.

“We briefed them on the Marondera situation. We gave them a chronology of events. We told them there was no meeting, but it was just a tree-planting event,” Biti said.

“They wanted the facts because government said there were no gunshots. The fact of the matter is there was live ammunition. The whole story doesn’t hold water. Even if they only released teargas, as they lie, why do that?”