NORTON MP Temba Mliswa has demanded that two Zanu-PF MPs be investigated over social media reports that they engaged in steamy se_x sessions in a Parliament bathroom.

Mliswa, who was recently investigated and removed as portfolio committee chairperson over reports he had demanded a bribe from a Harare businessman, demands that the two named legislators be probed in the same manner by a Parliament privileges committee.

Clerk of Parliament Kennedy Chokuda has dismissed the message circulating on WhatsApp as fake, but Mliswa insists an investigation team must be set up still.

“The shameless author of the fake news article circulating on WhatsApp makes patently untrue and malicious allegations under the headline: “Legislators caught pants down in Parliament toilet”. Nothing of that sort ever happened,” Chokuda said.

Mliswa yesterday told the august house that the media could damage an institution such as parliament and even the integrity of individuals, just like he was accused of demanding bribes together with MDC MP for Binga North Prince Dubeko, MDC MP for Magwegwe Anele Ndebel, and Zanu-PF MP for Gokwe Kabuyani, Leonard Chikomba.

The trio were accused of trying to extort ZWL$450,000 from construction mogul James Goddard.

“By investigating us on the bribe issue, Parliament set a precedent. Now that there are allegations against MPs who are said to have engaged ins se_xual acts in the Parliament toilet, which shocked me because this institution must be protected, a probe team must be set up,” Mliswa said.

Mliswa said he was not being revengeful, but just wanted the precedence of investigations to be followed through. Mliswa said Parliament had rushed to defend the MPs because they were from the ruling party, yet when the extortion scandal broke out early this year, Parliament rushed to set up a probe team.

In response, Speaker of Parliament Jacob Mudenda said as a lawyer, he looks at whether there is a prima facie case to warrant an investigation.

“In the case of yourself (Mliswa) and others, there was a prima facie case that warranted an investigation, but not on this case,” Mudenda responded. 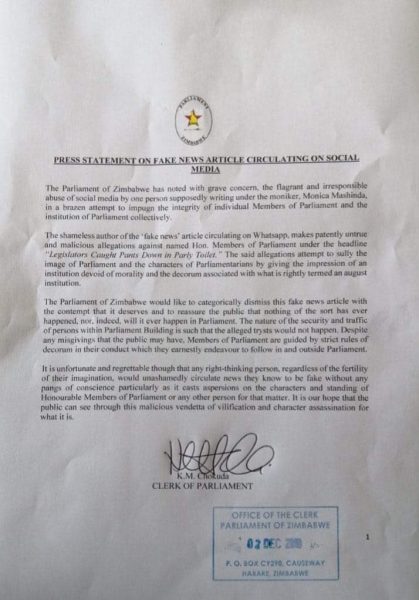