THE Zimbabwe Energy Regulatory Authority (ZERA) has announced a reduction in the levels of ethanol used in blending with unleaded petrol from 20% to 10%. The change is with immediate effect.

The statement by ZERA reads:

Please be advised that the level of the blending of anhydrous ethanol with unleaded petrol has been reduced from E20 to E10.

Implementation is with immediate effect, 5 December 2019. 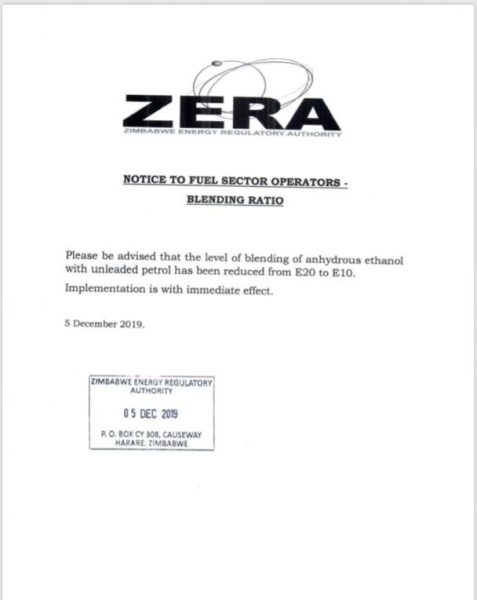 Until January this year, fuel was blended by 15 percent ethanol, but was reduced to 5 percent between February and March because of a shortage of ethanol.

The level was subsequently raised to 10 percent owing to improved availability of ethanol from Green Fuel in Chisumbanje.

The increase in the ethanol ratio is expected to improve fuel availability, bringing relief to the motoring public.

Of late, Zimbabwe has been experiencing fuel shortages due to subdued foreign exchange availability, a situation that saw the commuting public falling prey to unscrupulous transport operators.

Intervention measures through the issuance of letters of credit by Government, through the Reserve Bank of Zimbabwe (RBZ), has seen an improved supply of fuel, bringing to an end long and winding queues that had become a common feature at most service stations.