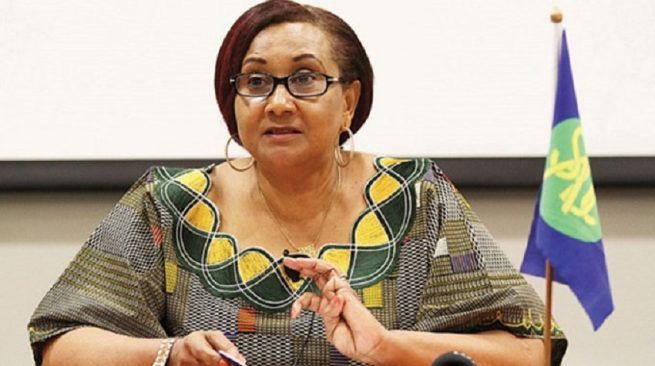 SADC Executive Secretary Dr Stergomena Lawrence Tax proved why she is regarded as the Iron Lady of the region over the weekend when she stood her ground to a barrage of abuse by anti-Zimbabwe activists on Twitter.

Social media bullies have since last week been abusing Dr Tax after she posted that she would continue “engaging on the removal of sanctions on Zimbabwe and support in the revitalisation of her economy”.

Dr Tax did not cow to cyber bullying, instead she meticulously went through each and every tweet and responded like a true states-woman.

She rejected claims that President Mnangagwa assumed office through a military coup, setting the record straight that SADC was only aware “of change of administration that was extensively celebrated and supported by nationals”.

Opposition elements posing as human rights activists are in the habit of “cyber bullying” anyone who speaks objectively about Zimbabwe.

Cabinet recently approved the principles of the Cyber Protection, Data Protection and Electronic Transaction Bill which seeks to enhance harmonisation of computer-related crime laws in the Criminal Law Act, to the SADC model and international best practice.

“For correct answers visit: http://sadc.int. #SADC is for SADC citizens. Let us support it, and contribute constructively and objectively,” Dr Tax tweeted on Friday.

When the attacks continued coming, Dr Tax expressed her strong opinion on the utility of social media outside of abuse.

She tweeted: “Social media is an excellent platform if used appropriately and smartly. But it can also be a source of chaos if used irresponsibly.

“I call upon #SADC citizens to use social media responsibly, while also noting that freedom of expression is not freedom to insult or misguide!”

The cyber bullying then went into overdrive, with some accusing Dr Tax and SADC of failing to handle the Zimbabwean crisis.

“I’m sure you notice that almost 100 percent of the comments (responses) to your tweet are Zimbabweans frustrated at your organisation’s handling of the Zimbabwean crisis.

“You seem to be biased when approaching the situation in Zimbabwe and have let us down,” Oliver Mahata wrote.

Dr Tax was swift and brief: “The question has been responded to. Distinguish between national/internal affairs vs regional matters!”

Another twimbo called “angry” Zimbabwean, @Leo16685026, tweeted: “People are angry mom. The way SADC country leaders especially Zimbabwe abuse the citizens is bad. They treat the people like they own them.”

“I have already responded to this. Use the Parliament and Judiciary. Engage with the Executive.

“Regional bodies come in after exhausting internal mechanisms. Are you at that stage?” Dr Tax asked.

And when one writer accused SADC of supporting a coup, Dr Tax pulled a shocker and hit back: “Which coup? SADC is unaware of the said coup, is aware of change of administration that was extensively celebrated & supported by nationals!”

To help end online bullying and violence, the UN is calling for authorities to implement bullying and cyberbullying policies as well as advance ethical standards and practices among social network providers.