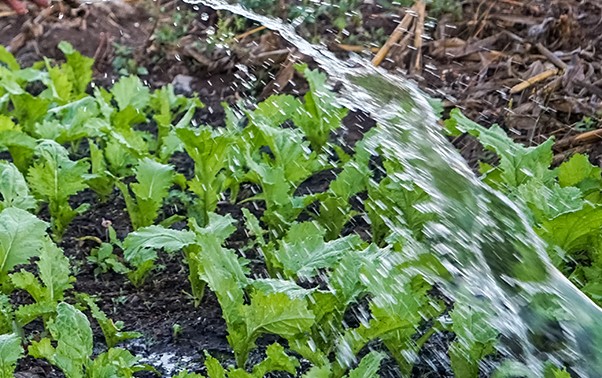 Hlanganiso Mokwena has a hard time finding relish for his evening meals as his vegetable garden is a no no as his naughty neighbour “waters” it by shamelessly urina_ting on it.

According to Mokwena, who resides at Mpopoma flats, all this started after he had a trivial spat with Webster Masikati which degenerated into harsh exchange of unprintable words.

They later kissed and made up. At least that’s what Mokwena thought. Masikati had other ideas as he had no thought of burying the hatchet. Literally taking a piss in Mokwena’s vegetable garden seemed to be his best revenge mechanism.

Mokwena, who could not stomach going more days without harvesting from his garden, dragged Masikati to Western Commonage Courts, where he revealed all the repugnant details of his golden shower war with the neighbour from hell.

“Masikati is in the habit of urina_ting in my vegetable garden. Life is very hard and I rely on my garden for relish so it breaks my heart to see Masikati urina_ting there every day,” Mokwena told the court.

Mokwena further revealed that besides urina_ting, Masikati has tendencies of stomping and jumping up and down in his garden.

“Masikati resides at the flat’s upper floor and I stay on the ground floor. He usually jumps from upstairs to my vegetables.

When he lands, he will jump up and down just to make sure he destroys my vegetables. The respondent also dumps his garbage in my yard. May the court assist me so that the respondent shows me respect? He must not urina_te or jump in my vegetable garden”, said Mokwena.

In his defence, Masikati flipped the cards and said Mokwena was the disrespectful one.

“All that Mokwena said is incorrect. In fact the truth is he is the one who does not respect all the occupants of the flat as he acts as if he owns the place.

In his ruling, magistrate, Urgent Vundla ordered Masikati to desist from insulting and emotionally abusing Mokwena and to stay clear of Mokwena’s garden.