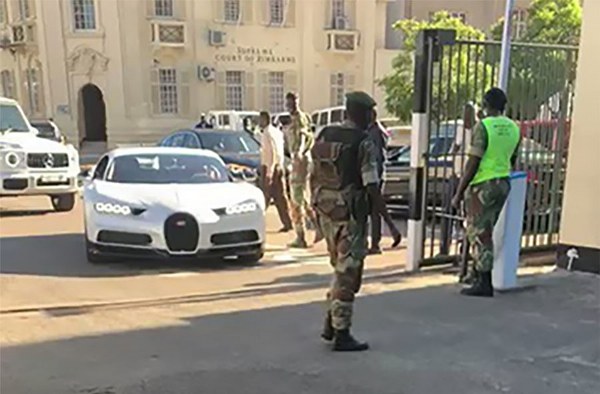 Is businessman Frank Buyanga really the owner of the new Bugatti Chiron– one of the world’s fastest cars – worth over US$3.4 million that landed in Zimbabwe last week?

Mystery still surround the owner the new beast after a video emerged recently online showing the Chiron, the successor to the Bugatti Veyron, driving into Defence House in Harare’s CBD.

H-Metro was inundated by calls from several people in and around the city who wanted to know who the owner of the car is with some convinced it belonged to Buyanga.

The Bugatti Chiron is a mid-engine two-seater sports car developed and manufactured in Molsheim, France by French automobile manufacturer Bugatti Automobiles, the successor to the Bugatti Veyron.

The Chiron’s top speed is electronically limited to 420 km/h (261 mph), or 375–380 km/h (233–236 mph) without the specific key, for safety reasons, mainly arising from the tyres as the manufacturer concluded that no tyre currently manufactured would be able to handle the stress at the top speed the Chiron is capable of achieving.

Independent testing by an owner has indicated that the Chiron can easily attain its limited top speed. Mixed fuel consumption is 22.5 L/100 km (12.55 mpg‑imp; 10.45 mpg‑US.

The only person who has been known to own a fleet of expensive vehicles in the country is Frank Buyanga.

Entrepreneur Buyanga last Tuesday treated shoppers and people to a rare sight after he parked some of his expensive vehicles at Cafe Nush at Avondale Shopping Centre in Harare.

The three vehicles included one of his latest acquisition, a Lamborghini Aventador S and two BMWs, an X7 and a 7 series.

In April this year, the businessman emerged as the owner of the Lamborghini Aventador S worth about R7.48m that landed in Harare.

This was after the car had been spotted in and around Harare’s northern suburbs. A few days later, H-Metro spotted his crew with the car at the arrivals section at the Robert Mugabe International Airport and moments later Buyanga walked into the Lamborghini Aventador S and drove off.

Motoring enthusiasts at the airport could be seen taking pictures and videos of the Aventador – powered by a V12 engine which produces 544kW and has a 350km/h top speed.