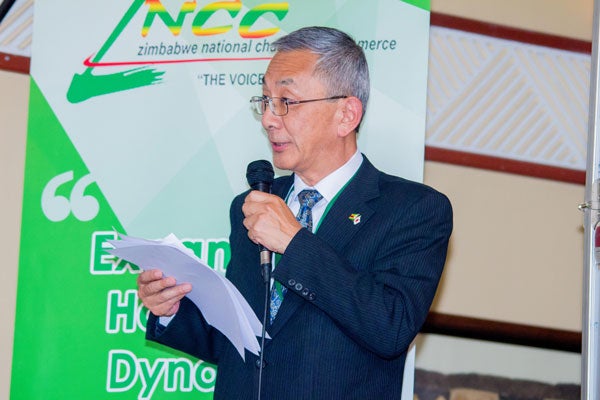 JAPAN, the world's third largest economy after the United States and China, is frustrated by Zimbabwe's slow pace of implementing reforms, such as tackling corruption, which has dented the southern African country's golden opportunity to repair frosty relations with the international community as well as attract foreign direct investment (FDI), the Zimbabwe Independent can report.

The Asian country in 2019 hosted the Tokyo International Conference on African Development (Ticad) meant to boost trade and investment relations between the country and the continent where it pledged to channel US$30 billion to Africa.

This year's edition of Ticad, which President Emmerson Mnangagwa attended, was held in August in Yokohama. Japanese ambassador to Zimbabwe Toshiyuki Iwado told the Independent that the Asian country was hopeful that after the departure of former president Robert Mugabe in November 2017, the new Mnangagwa government would usher in much-needed reforms.

However, he added that optimism has since waned, degenerating into frustration over the government's lack of appetite to implement a raft of promised reforms.

"I still remember the kind of euphoria after the military intervention in November, 2017.

At that time I tried to inform every Zimbabwean that this was an opportunity that could open a window for real reform. We were happy to hear that President Mnangagwa at the beginning stressed the importance of political and economic reforms," Iwado said.

"I do not know the details of what is going on here, but unfortunately, the words coming out of his mouth have not been realised in a very smooth way. Now that euphoria is gone. Without knowing the reality, without transparency, how can one tackle corruption? After my two years in Zimbabwe, my question always is, government is always saying we are doing this, we are doing that. But I have never seen the results. My comment is, we are frustrated because we cannot see the change."

With Zimbabwe generating about US$6 billion every year in export earnings, Iwado said he was baffled how that significant amount of money was not making meaningful change towards reviving the fragile economy.

He said Mnangagwa's administration should prioritise the tackling of corruption. It is also vital, he added, for the government to be transparent in its policies, including on investment.

"Statistics say US$6 billion is coming in every year. That amount is really significant if you can compare with neighbouring countries. Why is it that you cannot feel this US$6 billion in this country? Some say it is because of the corruption, some say a few people are just grabbing it. The point is, we do not know.

"How do you deal with US$6 billion coming in? The important thing is for this government to make this society transparent? That is the core issue, because from my side, Japanese companies need to judge, whether you like it or not, they need to judge. Without knowing what is going on here, how can they judge? The real problem from outside is that we cannot see what is going on."

Rampant graft, he emphasised, was one of the big factors repelling investors. "Many Japanese companies, frankly, are interested in doing business in this country. Are they comfortable with the business climate of this country? Are local companies comfortable? Many investors have talked about bribes. It is a corruption issue," Iwado said.

The Japanese ambassador also said a solution to the foreign currency crisis is needed if Zimbabwe is to attract investors. Both local and foreign investors are suffering owing to a lack of forex.

Iwado highlighted that the international community is puzzled why the government in Harare is not implementing reforms, including recommendations of the Kgalema Motlanthe commission of inquiry into the killing of civilians in the aftermath of last year's general election.

The Motlanthe commission was instituted by Mnangagwa last year to probe circumstances around the August 1 fatal shooting of civilians in protests that ensued before election results were announced.

"I am not criticising anyone, but I am just very frustrated. For example, the Motlanthe commission says security forces are responsible for the killings, no one gets arrested. No one is investigated."

Japan, he said, had suspended extending loans to Zimbabwe, and was offering only assistance grants. He said his country had completed the Nyakomba Irrigation Project in Nyanga after spending about US$16 million on the second phase. The Asian country has also funded a US$5 million road rehabilitation programme.

"We are also currently renovating the Chirundu-Makuti corridor at a cost of US$21 million. Recently in Mt Darwin, we pledged US$2 million for food aid targeting expectant mothers. In 2018, we channelled US$1 million to support the electoral system through UNDP (United Nations Development Programme). All of them are grants. We are not extending loans, unfortunately."

News Nelson Bhebhe - 7 April 2020 0
Prime Minister Boris Johnson has been moved to intensive care in hospital after his coronavirus symptoms "worsened", Downing Street has said. A spokesman said he...

Videos & Pics Sekai Moyo - 6 April 2020 0
It's been over a week since Zimbabwe entered a 21-day lockdown to curb the spread of the coronavirus. But people already calling for it to...

News Sekai Moyo - 6 April 2020 0
Model and socialite Jackie Ngarande has furiously denied allegations that she is having an adulter0us affair with Minister of Finance and Economic Development Mthuli...

News Muza Mpofu - 6 April 2020 0
Douglas Mwonzora and his ally Morgen Komichi will soon be expelled from the MDC Alliiance, Professor Welshman Ncube has revealed. In a meeting with the...