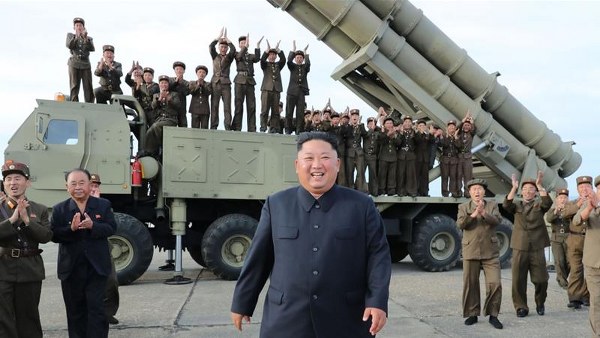 NORTH Korean leader Kim Jong Un on Wednesday said his country would continue developing nuclear programmes and introduce a “new strategic weapon” in the near future, state media KCNA said after the United States missed a year-end deadline for a restart of denuclearisation talks.

As the US makes “gangster-like demands” including continuing joint military drills with South Korea, adopting cutting-edge weapons and imposing sanctions, there were no grounds for North Korea to be bound any longer by the self-declared nuclear and inter-continental ballistic missile test moratorium, Kim said.

Kim convened a rare four-day meeting of the ruling Workers’ Party policy-making committee, “The 5th Plenary Meeting of the 7th Central Committee of the Workers’ Party of Korea,” which started this Saturday, as the US had not responded to his repeated calls for concessions to reopen negotiations, dismissing the deadline as artificial.

“The DPRK will steadily develop necessary and prerequisite strategic weapons for the security of the state until the US rolls back its hostile policy towards the DPRK and lasting and durable peace-keeping,” Kim said in the plenary.

He pledged to further develop North Korea’s nuclear deterrent, but left the door open for dialogue, saying the “scope and depth” of that deterrent will be “properly coordinated depending on” the attitude of the US.

“The world will witness a new strategic weapon to be possessed by the DPRK in the near future,” Kim said, using the acronym for North Korea’s official name, the Democratic People’s Republic of Korea.

“We will reliably put on constant alert the powerful nuclear deterrent capable of containing the nuclear threats from the US and guaranteeing our long-term security,” he said.

Hours after Kim’s statement, US President Donald Trump told reporters that Kim had signed a contract about denuclearisation and that he thought the North Korean leader was a “man of his word.”

“But he did sign a contract, he did sign an agreement talking about denuclearisation. That was done in Singapore, and I think he’s a man of his word, so we’re going to find out,” he added.

US Secretary of State Mike Pompeo said he hoped North Korea would “choose peace and prosperity over conflict and war.”

Kim had previously said he might have to seek a “new path” if Washington failed to meet his expectations.

US military commanders said Pyongyang’s actions could include the testing of an intercontinental ballistic missile (ICBM), which it has halted since 2017, alongside nuclear warhead tests.

Kim’s latest threats come as American officials closely monitor North Korea following its promise in December to deliver a “Christmas gift” to the US.

The specific language — North Korea referred to its first successful intercontinental ballistic missile (ICBM) launch in 2017 as a “gift” — sparked speculation that Pyongyang could do something equally provocative, though the holiday came and went without any weapons test.

Kim’s harder line could have political ramifications for Trump and his re-election campaign.

Analysts believe Pyongyang is worried that if it does cut a deal with Trump and he loses in November, his successor may not uphold the accord. North Korea and the United States have reached previous agreements that did not survive successive administrations.

News Sekai Moyo - 2 April 2020 0
Douglas Mwonzora the new Secretary-General of the opposition MDC-T has said that after the death of the party's founding leader, Morgan Tsvangirai, he advised...

News Muza Mpofu - 2 April 2020 0
The breath-taking Victoria Falls, which is known by the locals as Mosi-oa-Tunya has since its conferment as a UNESCO World Heritage Site in 1989...

News Sekai Moyo - 2 April 2020 0
FOURTEEN of the 15 Ethiopians that were arrested while hiding at a homestead in Gwanda have appeared in court facing allegations of entering the...

News Muza Mpofu - 2 April 2020 0
Bindura University of Science Education (BUSE) this afternoon claimed they have found a cure for the Newcastle virus which has caused major losses in...

News Sekai Moyo - 2 April 2020 0
CHINA has approved the use of bear bile to treat coronavirus patients, angering activists and raising fears it could undermine efforts to stop the...

You're free to join Khupe but we'll not allow you to drag everyone with...

News Muza Mpofu - 2 April 2020 0
AMBITIOUS top MDC-T politician, Morgen Komichi has been rejected by his own allies in Midlands Province where he is a party senator. By virtue of...