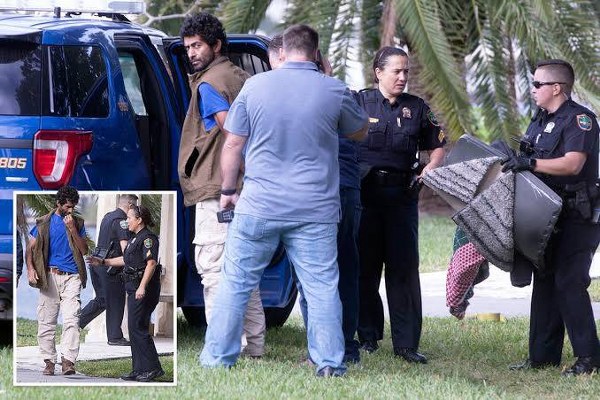 AN Iranian national allegedly armed with knives and an axe was stopped and held by cops on a bridge, just miles from President Trump’s Mar-a-Lago, local authorities say.

Police who arrested the man this morning found $22,000 (£16,840), a machete and a pick axe in his possession, as well as knives, reports Palm Beach Daily News.

According to the Palm Beach Post, Masoud Yareioeill Zoleh was identified as an Iranian national by his passport while his car was parked at Palm Beach International Airport.

He was taken into custody on Flagler Memorial Bridge on Friday, which is a mere four miles from Trump’s exclusive beach front club.

The man appeared to be homeless, according to the Daily News, who reported he also had camping gear with him.

The investigation is ongoing and local cops are reportedly cooperating with federal officials to get to the bottom of the incident.

Trump visited Mar-a-lago over the holidays so the arrest has sparked security concerns.

This is one of many unusual incidents on the famous island over the past year.

Another person was arrested on Monday at Mar-a-Lago by Secret Service with help from Palm Beach Police and the Palm Beach Sheriff’s Office, according to a redacted police report.

The document only revealed an arrest had been made and a passenger’s vehicle was towed.

Jing Lu, 56, was confronted by the private club’s security officers and booted out by security, but bizarrely she returned to take photos back in December.

In April, Yujing Zhang, 33, tried to get into to Mar-a-Lago with four cellphones, a computer, two Chinese passports, an external hard drive and a thumb drive in tow.

Zhang was sentenced to an eight-month prison sentence by a Florida federal judge who ordered her to be deported.

The latest Mar-a-lago arrest comes after Iranian officials put a £61million bounty for the murder of the American president.

The FAA issued flight restrictions over Palm Beach airspace from January 17 to 19 which may indicate a presidential visit next week.

Tensions in the Middle East have been increasingly fraught over the past few months, culminating in the death of Iran’s top military man.

They reportedly fired two rockets at American bases in retaliation as tensions continue to mount.