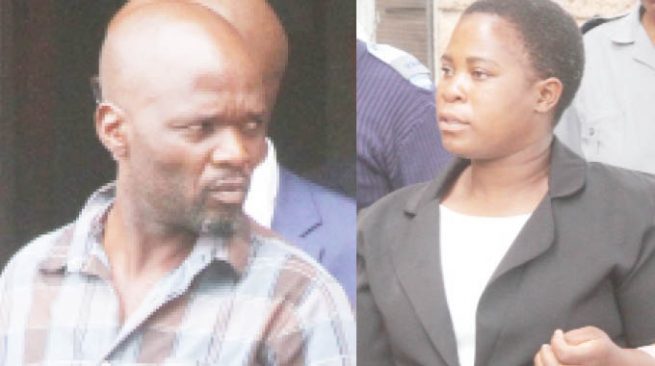 For a Bulawayo man named Mhlupheki Mpofu the answer to the question is prophecy as his ex-lover has literally made sure that he lives up to his name by making his life a living hell as she constantly violently harasses him.

Mhlupheki is really suffering as his jealous ex-girlfriend, Petty Moyo, a police officer attached to Police Protection Unit at Westgate in Bulawayo, has turned his life into a nightmare by persistently and incessantly abusing him together with his family.

So nasty is Moyo’s conduct towards Mhlupheki that it has since strained his marriage as she is reportedly stalking and calling him in the middle of the night.

In a bid to stop his ex-lover’s forceful behaviour towards him, Mhlupheki, on Friday last week approached the court seeking a protection order against her.

Through his lawyer Mhlupheki told the court that he had never known peace from the time he separated from Moyo.

“Complainant (Mhlupheki Mpofu) and respondent (Petty Moyo) are known to each other as they had an extra-marital relationship and from that relationship, a child was born. Owing to the fact that the complainant is married he could not marry the respondent.

“Subsequently, the respondent applied for maintenance under case Number M1560 /17 and the maintenance order was granted where the complainant was ordered to pay RTGS120 per month.

“In addition to the maintenance order and due to the economic challenges complainant also sends R800 to the respondent to supplement the RTGS120 he was ordered to pay.

“Not withstanding all that, the respondent has made her life agenda to continually abuse the complainant emotionally, verbally and psychologically, Further respondent continually harasses, intimidates and stalks the complainant through a chain of phone calls at any time of the day, and in the middle of the night and by also going to the complainant’s workplace where she shouts at him in front of his employers and passengers,” reads Mhlupheki’s submissions in part.

His lawyer also indicated that sometimes when Moyo calls Mhlupheki and when he answers, she either drops the calls or keeps quiet and she can do that throughout the night.

“Further, if the complainant fails to pick up or ignores the respondent’s calls, respondent resorts to calling the complainant’s wife despite the fact that there is a peace order that was granted against her.

“In light of the foregoing, I am approaching the honourable court on behalf of the complainant seeking a protection order against the respondent who is persistently and incessantly abusing the complainant and his family and whose vindictive or spiteful conduct has strained the complainant’s marriage”.

He entreated the court to stop Moyo from calling Mhlupheki and his family, not to harass, stalk him and not to go to his workplace.

A troubled Mhlupheki then suggested that whenever Moyo wants to communicate with him with regards to the welfare of the child, she should do so via his uncle.

Moyo however, refuted her ex-lover’s submissions saying he was the one who was in the habit of phoning her.

“Everything he said is not true. He is the one who phones me. He has even organised a meeting with me. I am surprised why he is accusing me of harassing him since I also have a protection order which was granted against him,” responded Moyo.

For the purpose of maintaining peace between the two estranged parties presiding magistrate Adelaide Mbeure ordered Moyo not to verbally, physically and emotionally abuse her ex-lover.

The magistrate also ordered Moyo not to communicate with him, visit his house and workplace with the intention of intimidating or harassing him.