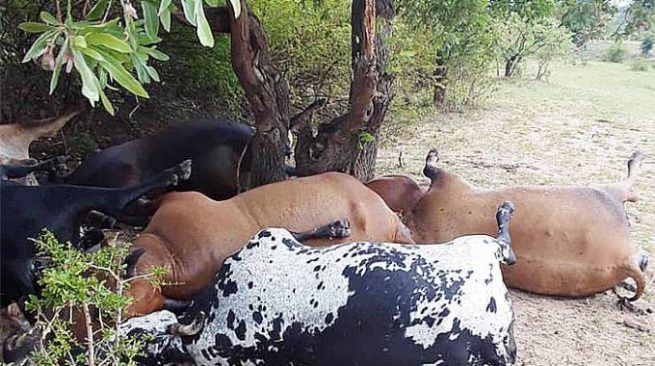 A 64-year-old man from Gokwe accused by fellow villagers of being responsible for a mysterious lightning that killed a fellow villager and 20 herd of cattle has sought refuge from a neighbouring traditional leader.

Chief Njelele on Tuesday confirmed the development, saying Mr Masvimbo was scheduled to appear before him on Friday last week, but he sought refuge at the neighbouring chief’s home.

He said as per their tradition, when a person seeks refuge from a neighbouring chief, he cannot be tried.

“There was a villager who was killed in a mysterious lightning two weeks ago,” said Chief Njelele. The lightning, which also struck and killed 20 herds of cattle belonging to families in my area left every one shocked because it was not raining.

“Some of the villagers later came to my home and said they were suspecting Mr Masvimbo of being responsible for the mysterious lightning bolt.”

Chief Njelele said according to the villagers, Mr Masvimbo had previously threatened to kill the affected families’ beasts after they previously turned down his request for draught power from them.

“It is said when rains fell sometime last year, Mr Masvimbo approached the two affected families asking for some draught power. They declined arguing that they were also busy with the beasts on the fields, but he reportedly threatened them with unspecified action and after some weeks, a mysterious lightning bolt struck and killed all their cattle,” said Chief Njelele.

He said he sent some emissaries to Mr Masvimbo’s homestead for him to appear before his traditional court.

“He did not turn up for the court on Friday, but when I made some inquiries, I then learnt that he had sought refuge at Chief Nemangwe. I will have to engage Chief Nemangwe and see how best we can handle the issue,” said Chief Njelele.

Contacted for comment, Mr Masvimbo denied being responsible for the mysterious lightning.

He confirmed he had sought refuge at Chief Nemangwe’s court fearing for his life.

“People in the village were accusing me of killing their cattle,” said Mr Masvimbo.

“I had to seek refuge at the neighbouring chief since people were threatening to kill me.”

Chief Njelele said he has since ordered that the beasts, which were killed in the lightning be burnt.