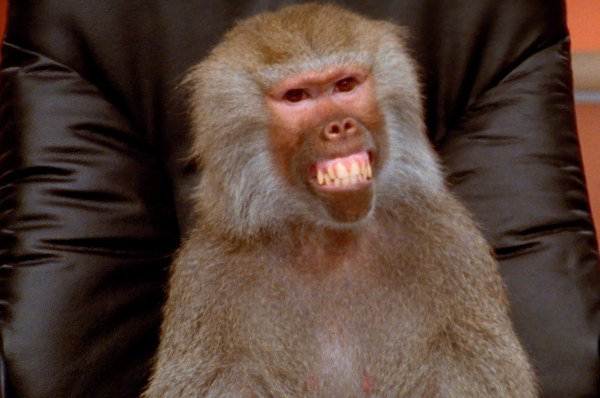 Tongues were sent wagging on Tuesday when a lone male baboon appeared at Benjamin Burombo Building which houses the Minister of State for Masvingo, Ezra Chadzamira’s offices where it spent most of the day relaxed on top of the two-storey building.

The baboon pitched up at around 9am and left the same way it came at 4pm.

It was temporarily forced from the roof by guards from the National Parks and it jumped into a nearby tree. However barely minutes later it climbed back onto the roof where it spent most of the day.

Scores of people took turns to watch the relaxed baboon with some saying that its presence in the Central Business District (CBD) is either a good or bad omen.

Efforts to get a comment from Chadzamira were futile as he is away on leave. His top aide Kudakwashe Machako who was present and was among those who are said to have taken videos of the primate could also not be reached for comment.

However Chadzamira’s PA confirmed the incident and said the baboon’s presence was quite a spectacle for many. She said that the baboon could have been pushed towards Burombo Building by street kids who were running after it.

“The baboon appeared from the gardens at the Civic center and walked down to Burombo Building. It climbed up the building, up the windows and onto the roof top where it appeared very relaxed despite noise from people on the ground,” said a guard at the building who declined to be named.

Chief Marozva of Bikita said it is scary news for a baboon to be seen in the middle of a city. He urged chiefs in the area to urgently discuss the matter because it can be loaded with meaning.

“It is a bad sign. There is no way a baboon can walk into town. There is a story behind this. Where did this baboon come from in the first place? Chiefs should convene a meeting and discuss the way forward after such an experience. It is scary to see a baboon in town,” said Chief Marozva.

Chairman of Chiefs’ Council in Masvingo, Chief Chitanga of Mwenezi said there is nothing significant about the baboon being spotted in town. He said baboons often come into town for food.

“A baboon can be seen in town anytime. There are different types of baboons and they associate closely with humans. This baboon could have been looking for food,” said Chief Chitanga.

Chief Chiwara of Gutu said the baboon could be a goblin kept by someone in town. He said people have used baboons for black magic and baboons can be used to stalk wives or fight enemies.

“Evil people use baboons to act on their behalf. A baboon can be sent to claim a debt or to claim a wife who runs away from her husband back to her parents. They are used in a scary way”, said Chief Chiwara.