Award-winning musician, Andy Muridzo was bashed after he was caught red handed relaxing with a married woman at her matrimonial home in Waterfalls yesterday.

Muridzo, who was on Saturday awarded the traditional Folk (Chinyakare/Chimurenga) category ZIMA award, told H-Metro that he had not been aware that the woman, Rai Dhladla,31, was married to Lenon Zaranyika.

Baba Keketso was in the company of one Simba, who fled from the scene and later returned with cops along with a female Mend only identified as Queen. 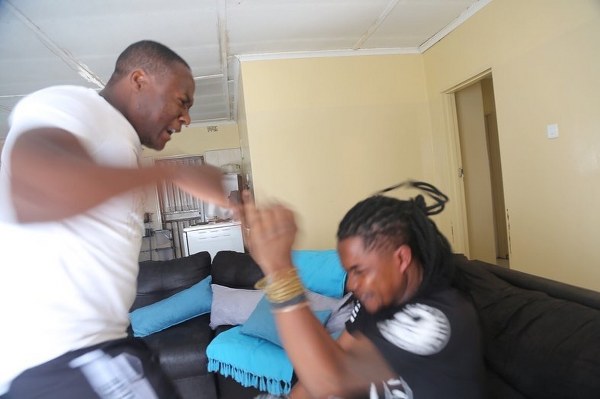 It is claimed that Muridzo, Simba and Queen arrived at the house at around 2am and a mole tipped Zaranyika, who then went home and attacked the “disrespectful” Muridzo.

In an interview with H-Metro, Muridzo said he was given hiding so painful he contemplated fighting back but feared Zaranyika had a gun.

“I was caught unaware and severely beaten. I thought of fighting back nekuti umm zvibhakera zvandarohwa zvanga zvichirwadza. “To be honest with you I was not aware that this woman was married and we were about to have some drinks with my friends.

“I and not in love with his wife, Queen is the one I am in love with and I do not know why she ran away leaving me exposed and unable to justify my relationship with her,” said Muridzo.

Simba later told H-Metro that he had no choice, but run away when he saw Zaranyika charging towards Andy, forcing him to jump over a precast wall at the house “I noticed that the man was armed, mdara ndamhanya ndikasvetuka durawall Queen azobuda nepaka corner sezvo gate ranga ravharwa,” said Simba.

Queen could not be reached for comment by the time of going to print. Meanwhile, Itai confirmed cheating on Zaranyika, arguing that her husband has been denying her
conjugal rights for some time and has more than one lover to take care of her needs.

“My husband has been cheating on me and at one time we spent more than four weeks without having se.x kana kundibata zvake. I am still young and besides that I have a high se.x drive and I need se.x from time to time and he was not available and that is why I decided to have boyfriends to quench my se.xual appetite “Andy was severely attacked and I felt sorry for him, I will accompany him to one of his shows and comfort him.”

She said she no longer had anything to hide about her marriage. “He phoned my father informing him that he caught me having se.x on our matrimonial bed and that hurt me so much that I am no longer ashamed of disclosing everything about our marriage.

The first time I cheated, I confessed everything to him and we moved on, but he decided to take our two children to boarding school leaving me with the younger ones.

“Four of my relatives came here and begged my husband to forgive me, he did and we continued with our marriage” said Itai.

Zaranyika seems set to end the marriage if yesterday’s drama is anything to go by as he, at one time put Itai’s clothes in a suitcase readying her to vacate.

“My wife started cheating when I was away in Egypt and upon confronting her over some love messages I found in her mobile phone, she confessed to her shenanigans.

“Her relatives pleaded with me, but I decided to take our school-going kids to a boarding school so that they would not see their mother doing silly things. ‘We have been legally married for the past nine years and due to her shenanigans, I resolved to deny her the conjugal rights she is talking about and looked for alternative accommodation.

“Her evil acts have exposed her, She now wants to tarnish my image and that of my friends and bosses and is now threatening to cook stories to that effect.”