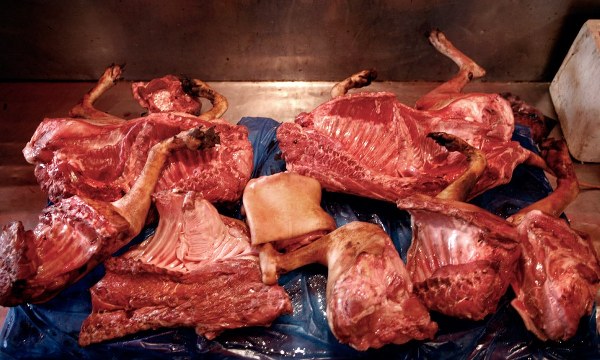 DARING Kuwadzana thieves met instant justice while one was left for dead after they were busted for selling a stolen dog meat to unsuspicious residents over the weekend.

The two, identified as GI Joe and Bhunu, allegedly stole a dog at a Kuwadzana Extension car park belonging to Privilege Moyo and skinned it at a nearby bushy area before selling the dog meat purportedly as game meat to some residents for US$15.

Hell broke loose when Bhunu and GI Joe had a fight over us$3 balance from one customer as GI Joe spilled the beans during the arguments.

H-Metro spoke to the victims at Sifra Kuwadzana Extension shopping area and one identified as Rasta said GI Joe went to the customers telling them they had been eating dog meat following a disagreement over the balance.

“People later discovered they have been eating dog meat when GI Joe spilled the beans irked by the US$3 dispute.

“The vendors told him to come later since they did not have the balance but GI Joe got furious and told them, ndokusaka murikudya nyama yeimbwa.

A video of Bhunu, and GI Joe being forced to eat raw dog meat after residents got furious has since gone viral on social media.

GI Joe is said to be critically ill at a local hospital after a lashing from residents while Bhunu has since gone into hiding.

H-Metro visited Privilege Moyo who claimed to be the dog owner and he confirmed that the two culprits stole his dog and skinned it leaving traces of bones and the head.