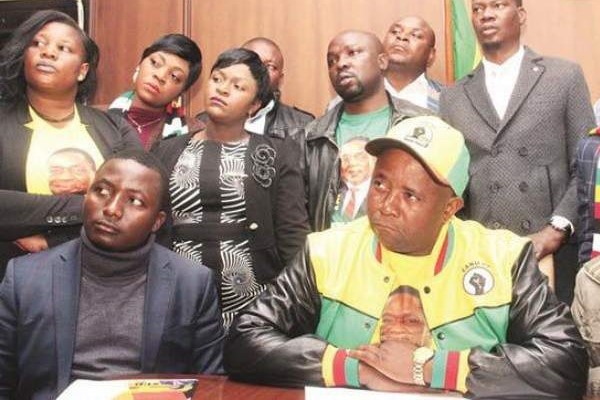 TWO of the three former Zanu PF youth leaders, who were axed from their positions last week, allegedly extorted goods and services from businessman and Grain Millers Association of Zimbabwe (GMAZ) chairperson Tafadzwa Musarara before accusing him of being corrupt.

They were fired from their positions for indiscipline together with their boss Pupurai Togarepi, who showed solidarity with them.

But in a sudden turn of events, leaked documents indicate that Togarepi and Tsenengamu could have been abusing their ruling party positions to force Musarara to “donate” goods and services worth several thousands of United States dollars to their causes.

The two requested in writing to the GMAZ boss items that ranged from maize meal to sports kit(s) donations.

The requests were made in December after the Zanu PF youths named Musarara as a corrupt individual in June last year, raising suspicion on the decision to ask for donations from a person they labelled corrupt just six months before.

In one of his written requests to Musarara, Togarepi, who is the legislator for Gutu South, on December 10, 2019 in his capacity as Zanu PF chief whip, requested a donation of soccer and netball kits worth US$3 000 for his constituency.

“We launched a multi-disciplinary sports academy for Gutu South constituency on the 26th of October 2019 and we are kindly requesting your organisation for a donation of the following pieces: sets of football jerseys, sets of netball jerseys, company-branded T-shirts and hats, football and netball balls,” reads Togarepi’s donation request to Musarara, which was printed on the Parliament of Zimbabwe letterhead and date stamp.

On December 20, 2019, Tsenengamu also allegedly requested 500kg of maize meal from Musarara and the consignment was issued under Musarara’s company (Alpha Grain) under release order number 1030.

Tsenengamu, who requested the maize meal on behalf of Mt Darwin Hospital, received the consignment in person, loaded it in his truck (registration number AES 8041), acknowledged receipt by appending his signature and national identity number (05-2007929-G-05) and phone number (0774 939 366) on the release order.

Togarepi was not picking calls yesterday.

However, he responded to questions sent on his WhatsApp, but deleted the response before NewsDay could read it.

Tsenengamu accused Musarara of trying to tarnish his image, warning nothing, even suspensions, would deter their fight against corruption.

He said it was actually Musarara who pledged to donate after he apprised him of his intention to throw an end of year party for Mt Darwin Hospital workers to appreciate their services.

“This dispatch note indicates very well that it’s for Mt Darwin Hospital. Check at the top. I just transported it and signed for it,” Tsenengamu said.

“We come from the same province with Musarara and in one of our discussions, I mentioned that I had organised an end of year party and ceremony for Mt Darwin Hospital staff to appreciate their service. That is when he offered to support what I was doing through a donation to the hospital and that is it. I communicated to the hospital authorities and offered to ferry it to them.”

In June last year, the Zanu PF youths called a Press conference, where they named and shamed Musarara and other businesspeople, including top party officials like Obert Mpofu, as corrupt.

They were allegedly reprimanded by President Emmerson Mnangagwa in a politburo meeting, who demanded evidence before immediately setting up a commission to investigate the claims.
They were told to follow party procedures.

But Tsenengamu and Matutu last week defied party orders and held another Press conference at a private venue, where they repeatedly accused Musarara, Tagwirei and Rautenbach of being corrupt.

The duo insisted on their anti-corruption fight, vowing to take their evidence to the Zimbabwe Anti-Corruption Commission.

However, on Monday, the anti-graft body said it was still to receive the alleged evidence.

Musarara has already slapped the trio with a $10 million lawsuit.

“… is for payment of $10 million being defamation damages. The damages arise out of a statement made by the defendants at a Press conference that plaintiff was a corrupt businessman who was diverting maize meal to the black market, thus causing shortages of the product in the shops,” part of the summons read.

Tsenengamu and Matutu have been given 10 days to enter notice of appearance to defend themselves.

Meanwhile, Youth deputy minister Tinoda Machakaire at the weekend said Zanu PF youth must stop extorting goods and services from people while propagating falsehoods of divisions at the cockpit.

“We do not want this issue of fighting and challenging the party leaders that is happening now. We want to respect our party leadership. It is us, the people, pursuing gossip and that should not be tolerated. Nothing will ever happen and if we are going to be divided. It is us here because of power and positions, not our leaders,” Machakaire said in what seemed a thinly veiled attack on Matutu and Tsenengamu.

“We said it before that if you crave for power, you will get lost. This is the people’s party and everyone should fit in. Do not rush for posts. Let us unite and not focus on power,” he said at a party meeting in Hwedza.