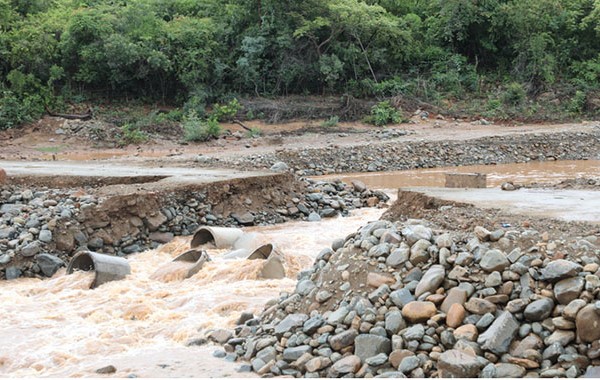 HEAVY rains that have been pounding Manicaland for days now left a trail of destruction in some areas but posed no immediate danger to human life.

Most affected is the road infrastructure especially in Chimanimani, a district pummelled by Cyclone Idai in March last year.

The incessant rains washed away a detour at Biriiri Bridge No. 1 on Tuesday night cutting off Wengezi, Nedziwa and Bvumba from the rest of Chimanimani.

The detour was created to enable J.R. Goddard to refurbish Biriiri Bridge No. 1 whose approaches were damaged by Cyclone Idai last March.

Destruction of the detour by the rains not only affected villagers but aid agencies operating in Chimanimani.

They were cut off from Mutare and Ngangu.

Most victims of Cyclone Idai are still camped at Ngangu as they await relocation by Government to permanent sites in Chimanimani district.

They receive food aid the non-governmental organisations and the Department of Social Welfare.

When The Manica Post visited Chimanimani on Wednesday, workmen from J.R. Goddard were on site attending to the bridge.

The J.R. Goddard employees had by early Wednesday afternoon managed to create a temporary passage for vehicles after filling up the approaches to Biriiri Bridge.

They were yet to attend to the detour bridge owing to increased water flow in the river.

“It has been hectic here. The detour bridge was washed away by rains on Tuesday night cutting off traffic on either side. We expect to have completed permanent works on the bridge in two weeks,” said an engineer with J.R Goddard.

Besides slight landslides on some section of the road leading to Skyline, the rains did not cause further damage in Chimanimani.

Skyline, which was severely destroyed by Cyclone Idai, was trafficable on Wednesday with workmen from Masimba Construction refurbishing sections of the road they were contracted.

The road is, however, highly slippery.

There were no immediate reports of any schools having been affected by the rains in Chimanimani East as of Wednesday.

“Water levels in Save River have risen drastically but we are very safe. We are not in floods danger so far. We use Tongagara Refugee Camp as a benchmark. When there is risk of flooding we move refugees to higher grounds of which we have not done so as there is no danger.”

Mr Mushava said the heavy rains had left most roads in Chipinge town and the rest of the district in a bad state.

“The state of roads in most areas is very bad owing to erosion.

“We now have gullies cutting across roads in areas like Gaza here in Chipinge town. We are engaging local authorities to impress upon them the need to use devolution funds to attend to our roads.”