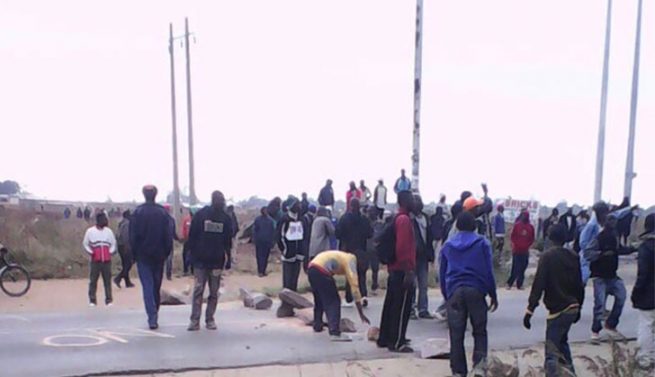 President Emmerson Mnangagwa’s government has come under fire from the opposition and human rights activists following a wave of arrests of people who allegedly took part in protests last week.

Two MDC officials, who were part of a group of 34 that were arrested for allegedly taking part in a protest last Wednesday, remained in police custody yesterday.

Opposition supporters took to the streets of Harare to protest against the deteriorating economic situation in the country, catching the police by surprise.

Human rights defenders and the opposition MDC said they were worried that police were now going after people suspected of having taken part in the demonstration.

The Zimbabwe Lawyers for Human Rights (ZLHR) said even schoolchildren had been caught up in the dragnet.

“Authorities have stepped up their onslaught against dissent after arresting a total of 47 people in one day for allegedly participating in anti-government protests over the country’s worsening political and economic crisis,” the ZLHR said.

“In Harare, police officers first arrested seven students at Allan Wilson High School, whom they detained at Harare Central Police Station after accusing them of participating in an illegal demonstration, which was held in the capital city early this month.”

“The MDC is disappointed and dismayed by the continued harassment and violation of people’s rights as exemplified by the unjustified remand in custody of Makomborero Haruzivishe and Alan Moyo to Monday for bail ruling,” Gonese said.

“The duo were arrested on Thursday evening at the Red Roof restaurant together with 32 others and at the time of their arrest they were neither informed of the reasons thereof nor informed of their rights to contact a legal practitioner or their relatives in violation of Section 50 of the constitution of Zimbabwe.”

Gonese said the arrest of opposition activists had become a routine.

“This wanton and brazen behaviour has no place in a democratic country,” he said.

“But unfortunately in Zimbabwe, it is now the norm.

“We in the MDC have no hesitation in condemning this kind of behaviour.

“It is time for the police to be held accountable for their actions.”

Police in Mutoko also arrested seven women, including a six-month-old baby, and charged them with participating in an illegal gathering.

The seven women, according to the ZLHR, were set free on $100 bail and would appear in court on March 5.

MDC leader Nelson Chamisa recently warned that his supporters would be forced to go to the streets to protest against government’s failure to address the mounting economic problems in the country.

Last year, the police and army clamped down on protests against Mnangagwa’s government and several people were killed after the military was deployed.

News Muza Mpofu - 14 June 2021 0
A Gutu man who torched a media storm last month after he was arrested for robbing his victims using a ghost suit has been...
Loading...