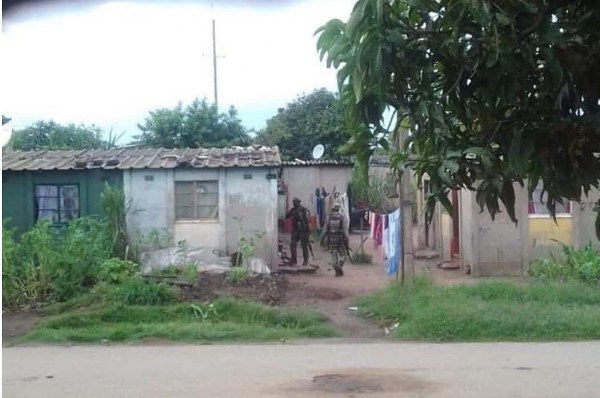 The soldiers, Emmanuel Tafirenyika Kambanje, 28, who is employed at 53 Infantry Battalion, Kwekwe and Rwatirera Zunde, 40, of Msasa Base Workshops appeared before Harare magistrate Barbra Mateko yesterday.

Kambanje is being charged with robbery while Zunde faces armed robbery charges and he was advised to approach the High Court for bail. Kambanje will be back in court tomorrow for his bail application.

The first complainants are Percy Kureva and Universe Mapati of Chitungwiza. Prosecutor Sabastian Mutizirwa alleged that on February 17 around 9pm Kureva arrived home from work and left the kitchen door unlocked.

Zunde and his three accomplices, who are still at large, followed Kureva into the house and manhandled him at gun point.

They allegedly demanded US$200 000 and ordered complainants to lie before they were tied hands and legs with electric cables.

The court heard that Kureva surrendered US$150 and $100 and told them that that was the only money he had before they dragged his wife to the bedroom and threatened to rape her.

It was alleged that she reached for her purse and surrendered $20 but Zunde continued insisting that there was US$200 000 hidden somewhere in that house.

They allegedly ransacked the house and stole the couple’s clothes, three cell phones and various other valuables valued US$1 350.

At that moment, detectives at Chitungwiza Police Station received an anonymous call alerting them of the robbery and swiftly rushed to the scene.

They fired warning shots on arrival and the gang managed to flee from the scene but left their Toyota Premio which had been parked in the yard.

The car was searched and police recovered a cell phone with an Econet line and had a screen saver of Zunde’s picture and he was subsequently arrested on February 20.

Searches conducted at Zunde’s house led to the recovery two Emulites tubes and Ignitor code explosives hidden under his bed.

He was positively identified by Kureva and Mapati during a parade.

The other incident occurred on February 22 at Sifra Shopping Centre, Kuwadzana in Harare.

Kambanje was in the company of his four accomplices Tatenda Nyakudyano and one Richard and Silas, who are still at large.

They approached the complainant (name not supplied) who was seated in his car, a silver Toyota Allion and began assaulting him accusing him of illegally dealing in foreign currency.

The court heard that Kambanje dragged the complainant out of his car and teamed up with his accomplices to assault him.

They allegedly searched him and stole US$20 000 and $420 before the complainant fired a warning shot causing the gang to flee.

However, Kambanje was apprehended with the assistance of the public and was taken to Kuwadzana Police Station.