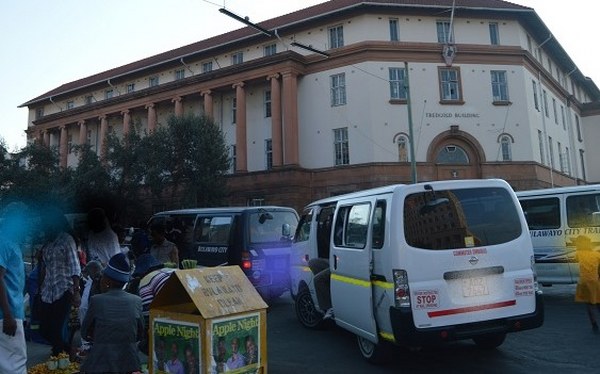 An eight-month preg_nant woman and mother of seven gave a crowd the fright at the Tredgold Court pavement when she threatened to kill both herself and her unborn baby on the spot by jumping into the busy Fort Street on Wednesday.

Not only did the small crowd fear for her life, but they feared she was going to induce early labour for her unborn baby.

B-Metro rushed to the scene where Thabitha Mutizira was drawn to court that morning to seek legal advice after she learned that her baby daddy Raymond M Stoddart had taken their two-year-old daughter without her permission, defying a 2019 court ruling.

“We separated around 2018 and the court gave me custody of our daughter last year in February. He could only see the child on weekends and he was supposed to be paying maintenance. He never did any of that. When I asked for money, his friends would harass me. I ended up selling firewood and everything I could with the baby strapped on my back,” said the weeping Mutizira.

Mutizira said she met a new man and got married last year. They stay in Cowdray Park and when her pregnancy started getting bigger, she took her daughter to her mother in Gutu and her other six children to their respective fathers who agreed to co-parent.

“I called my mother over the weekend to tell her that I was going to send food for my child but she told me that Stoddart had come with police officers to her house on Thursday and snatched my daughter away from her,” she said in between sobs.

The people who were gathered around the distraught mother advised her to report to the police as they feared she was going to harm her unborn baby. As people gave up and began to disperse, Mutizira got up from the pavement in between parked cars and ran to the road in a bid to jump in front of a moving vehicle. However, she was quickly apprehended by people who were able to notice her motives.

That didn’t sit well with the heavily preg_nant mother of seven as she hastily threw down her belongings and dramatically fell to the ground where she started rolling and hysterically crying even louder.

Police officers from the Tredgold Court came to the scene and escorted her inside the building. She was advised to gather and bring all her documents from the previous cases that she had with Stoddart so that they could try to assist her. She was also told to contact Stoddart and understand how he got to take the baby without informing her.

“Later on I saw her sitting at that pavement (different side) calmly eating bananas before she got up and went towards the taxi rank,” said one of the guards that was on duty on Wednesday.