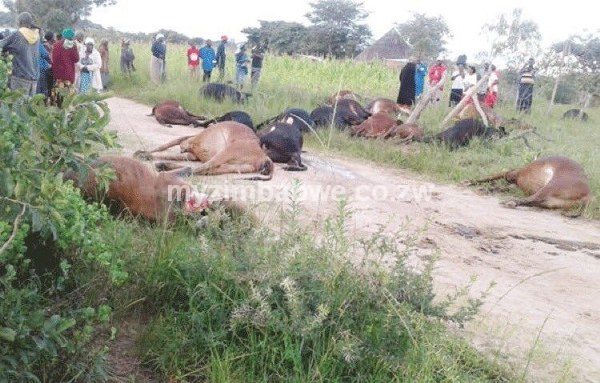 CARTELS comprising butchery owners, rogue elements in the police service and officers from the Veterinary Services Department are corruptly clearing cattle infected with January disease and anthrax before unleashing uninspected beef on the market, The Herald can reveal.

Butchers have set up bases for agents in most rural communities like Mhondoro, Buhera and Murehwa.

Infected cattle are selling for as little as US$25 each, while the agents demand commission ranging from $100 to US$10 for every beast sold. January disease, also known as Theileriosis, is a tick-borne disease common between December and March and is spread through the bite of the brown ear tick.

Thousands of cattle have died since last year and the Ministry of Lands, Agriculture, Water and Rural Resettlement is still to establish the actual number of deaths.

An investigation exposed connivance between butcheries and cattle owners. Officers responsible for cattle clearance were also cited as part of the illicit trade.

Most cattle, according to the investigation, are dying after receiving Butachem, a drug used to fight January disease.

The drug, according to animal health experts, can cause cancer if people consume the meat before or within 42 days of treatment.

Director of the Veterinary Service Department Dr Josephat Nyika warned people against consuming products of cattle infected or that would have died of January disease or any other illnesses.

“Please do not ever eat that beef,” he said. “Once a beast dies after receiving a dosage of Butachem, it must be burnt or the owner should do a deep burial. That meat should never be eaten. After giving the cattle the drug, there should be a 42-day withdrawal process, which should occur before the meat becomes safe for human consumption.

“Consuming it before or within those 42 days is disastrous. The drug causes various cancers. To the people of Zimbabwe, I say, do not eat that meat.”

Despite warnings by the animal health experts, uninspected and possibly infected beef still finds its way to the market through corrupt acts.

What makes the matter of more concern is that meat consumers cannot tell if the meat would have been inspected before they buy it from butcheries or other outlets.

Dr Nyika said the only way to prevent cattle from dying of January disease was regular dipping.

“It is not known yet how many cattle have died from this scourge because cattle owners are not reporting all deaths to the authorities,” he said.

“However, provinces are still compiling a list of deaths and we will be able to give out the correct figures soon.”

The investigation covered areas in Mhondoro, Mashonaland West and Buhera in Manicaland, where villagers confirmed the death of cattle and the sale of the uninspected meat to buyers from towns like Harare and Chitungwiza.

At Watyoka Business Centre in Mhondoro, an agent identified as Tawanda, charged $100 commission for any beast purchased.

“Those which show little signs of sickness cost around US$60 each, while others that are visibly affected and dying are selling at prices between US$25 and US$40,” said Tawanda.

“How many do you want my brother? I can assure you that within an hour, we will start receiving the beasts.”

True to his word, Tawanda took the news crew to a Mrs Mahuyo’s place, less than a kilometre from the business centre.

Mrs Mahuyo’s cow, which was visibly sick, was pegged at US$50.

Tawanda said he had connections at the local police station where a police officer (name withheld) charged US$5 for every beast cleared.

“Police clearance is not a problem because I have a friend who clears cattle at the police station,” said Tawanda.

“We simply take the particulars of the seller and those of the buyer to the veterinary office, who can even sign the clearance papers without inspecting the cattle.

“Last week, with the assistance of these officers, I sold 15 cattle to Harare buyers.”

Butcheries at Watyoka and Mubaira business centres have already slashed beef price from $80 to $40, as beef has flooded the market.

Chief Mashayamombe of Mhondoro-Mubaira lamented the death of cattle in the area and the rampant sale of uninspected beef.

He urged Government to urgently address the January disease problem and put in place strict measures to end sale of uninspected beef.

“Most of my subjects are now without any cattle at all,” said Chief Mashayamombe.

“In some areas, people have now switched to using donkeys which are now costing between US$50 and US$70.

“Those responsible for protecting these cattle from diseases should up their game. There should be awareness campaigns to educate the public on the dangers of the uninspected beef.”

Mhondoro villagers are now resorting to buying donkeys from elsewhere to replace the dying cattle as draught power. In Buhera, most households were also left without cattle.

At Nharira Business Centre, some 50 kilometres west of Murambinda, an agent identified as Gweje confirmed the prevalence of “dirty meat deals”.

He said most of his clients were from Chitungwiza.

“I have been into this business of selling cattle and beef for a long time,” he said.

“I have a lot of clients in Chitungwiza. Most of the butchers prefer the infected cattle, which are cheaper.”

Gweje charged US$10 commission for each sell he would facilitate.

“I can organise as many cattle as you want,” he said. “I am charge US$10 for each beast, or equivalent of the amount in bond notes. The prices are reasonable and I can get you good beasts for as little as US$40.”

Just like Tawanda in Mhondoro, Gweje relied on his connections at the local police station and the veterinary officers, saying clearance was not a challenge.