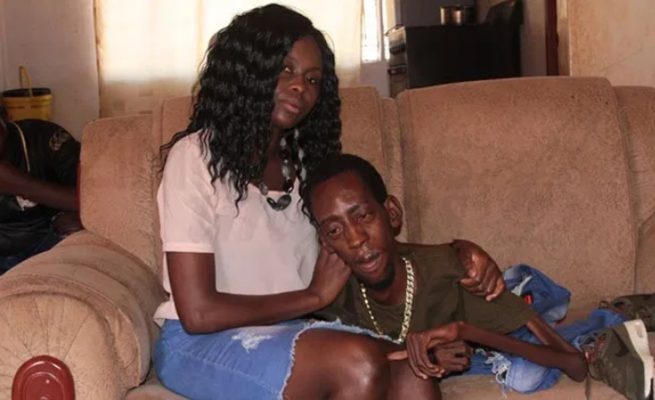 Match made in Heaven

When love reigns, no one will be able to separate the two.

People can talk whatever they like but for heavenly made match, negative words can strengthen the bond between the love birds.

Somehow it is more like adding fuel to the flame of love.

Love appeared at the right age in the life of musician Tongai Gwaze (27) popularly known as Greatman with his perfect match Silibaziso Masara (24).

The love birds first met in the heart of the Central Business District of Harare at corner Julius Nyerere and Robson Manyika streets.

It was at the corner symbolising that Greatman’s marriage life was around the corner.

As a busy man, he was singing to his audience some melodies which stroke Silibaziso’s heart on the tenderest spot.

In an interview with Saturday Herald Lifestyle, Greatman said they first met in the CBD about nine months back when he was doing what God sent him to do, music and was attracted by Silibaziso’s beauty.

“I first saw her in the CBD when I was singing and dismally failed to contain myself and kept on staring at her.

“I tried to concentrate with my work but I kept on staring at her, it was love at first sight,” said Greatman.

His wife confirmed that. Greatman was given ten miles ahead close to winning Silibaziso’s heart due to the fact that, she was already in love with his music. Eventually, the two exchanged phone numbers and started chatting the very day.

Silibaziso kept on following him where he was performing as usual since she was one of Greatman’s biggest fans.

They became to know each other well through chatting until Greatman decided to let the cat out of the bag. He delivered words which are too difficult to tell a girl to kick start a love relationship.

“After several appearances, he told me that he loves me more than anything under the sun. I saw love in his eyes but I didn’t take him serious,” said Silibaziso.

It is in woman nature that when she receives such a message, the words will be circulating in her mind.

Greatman was on her mind before she accepted the proposal.

“All his utterances of that day became part of myself. I was busy thinking for a response to his proposal as he kept on piling pressure on me,” she added.

Love develops and grows like a mustard seed, she started developing love for him.

Pressure and excitement gripped her since she was on the verge of dating a celebrity. Finally, she accepted his proposal.

He found out that all the qualities he wanted suits and fits like a jig-saw puzzle with those of Silibaziso. Greatman, as a great man paid an undisclosed bride price to Silibaziso’s parents in Ascot, Gweru on March 10, 2020.

At first, Silibaziso’s relatives were not approving of the relationship between the two.

But surprisingly, Greatman’s in-laws approved the marriage because they understand their daughter more than anyone else.

“My relatives didn’t want me to marry a man with disability, but my parents approved the marriage because they value love and also respect my feelings.

“I feel secure to be with Greatman, I love him more than words can say,” she said.

To Silibaziso’s parents, it was not a bombshell since they know that their daughter loves playing with people with disabilities.

She said she grew up in Gweru where she used to spend more time with her lovely friends.

“I grew up in Gweru at Warambwa farm where I used to interact with my friends with disabilities, enjoying their company.

“For my hubby it is out of unconditional love and not something new in my love.

“That’s why we are happy in our marriage, I love everything about him”, she said.

Love has no boundaries and true love does not rely on material things.

Greatman said he neither owns a car nor a house and his wife does not mind that at all.

“I don’t have a car and a house, we are renting, but currently paying for a stand in Chiedza East to Morgan mortgage,” he said.

The two are happily married, share great moments together in Westlea where they lay their heads when the darkness fall.

Renting five rooms with their siblings.

Greatman showed that her presence provides warmth and the two are extremely deep in the ocean of love.

Silibaziso also highlighted that Greatman is sweet, his utterances are also sweet and he respects her.

“We live together in Westlea, the two are happily married, always playing laughing and cracking jokes at night after work,” said Kundai who is also Greatman’s manager.

Silibaziso knows her hubby’s favourite meal, she prepares sadza and beans frequently. He eats the meal every morning before going to work.

“Usually my hubby likes sadza and beans which I prepare for him. I always make sure that he is happy and not hungry.

“My main purpose as his wife is to put a smile on his face and he is a happy man,” Silibaziso added.

She feeds her husband, knows what he wants and describes the habit with astounding precision. Silibaziso is spoiling Greatman with unconditional love. You can observe that, Greatman is on cloud nine and is experiencing a novel-like love story.

The couple is looking forward to have children in future.

“Children come from God and we are expecting to have many of them.”

Seven is a biblical emblematic number, which symbolises fullness.

Isn’t it clear that the match was made in Heaven?

It’s natural that soon after paying lobola, the two will tie the knot.

Greatman and his wife are in preparation of a wedding but they did not disclose the date.

Silibaziso holds high hopes to wed at the Rainbow Towers but, is prepared to work with available resources.

“I have always wanted to wed at the Rainbow Towers but we definitely work with available resources. I am still looking for an affordable wedding dress. I know that my hubby would want something bigger, which includes an after party but, our budget will determine everything,” she said.