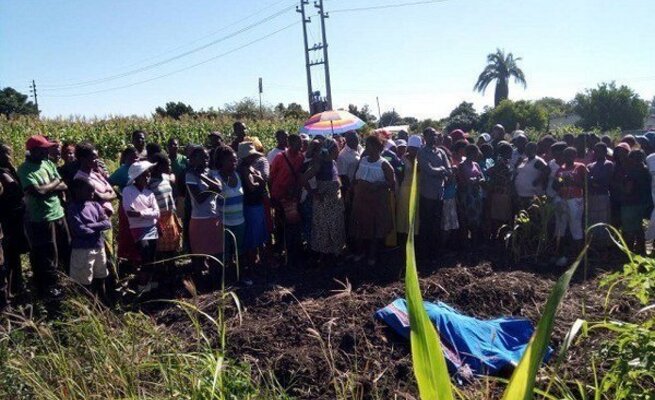 POLICE in Hwange have arrested a 23-year-old woman on her hospital bed after she terminated a preg_nancy and buried the baby in a shallow grave.

The alleged incident happened on Thursday.

The woman, Shyleen Ncube, 23, of Shangano village under Chief Nekatambe in Dete was arrested on Saturday at St Patrick’s Hospital in Hwange where she is admitted.

A herdboy driving goats out of a maize field came across the grave and alerted the woman’s mother-in-law, one Sitshengisiwe Ncube, aged 52.

Ncube went on to inform the police.

A report made to the police stated that Ncube gave birth to a baby boy and buried the baby in a shallow grave.

It’s not clear whether the baby was alive when she terminated it.

Ncube has been charged with unlawful termination of preg_nancy but is yet to appear in court as she is still admitted.

“A herdboy Alton Sibanda saw the grave as he was driving goats from a maize field,” read the police report.

“He informed Sitshengisiwe Ncube and the two went to the shallow grave where they saw bloodied footprints and followed them.

“The footprints led them to the accused’s homestead but found that she had already been rushed to hospital after she developed complications.”

Police were called in to investigate the matter.

“Police were tipped about the suspected terminated preg_nancy and went to the area on 21 March police to investigate.

“The mother-in-law led them to a maize field where the shallow grave was and later to the accused’s homestead which is at the end of the field.”

Police dug the baby which was wrapped in a piece of cloth.

The baby was taken to Hwange Colliery Hospital mortuary.

Ncube is still admitted to St Patrick’s Hospital where her condition is stable and is expected to appear in court, according to police.

Videos & Pics Sekai Moyo - 17 June 2021 0
Police had to intervene yesterday when relatives of a 23-year-old-man who died last week from injuries sustained after being attacked at Duriro Bar in...
Loading...