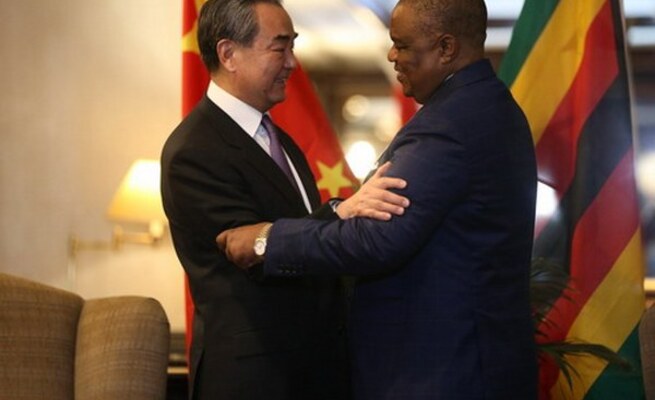 According to military and intelligence sources, the vice president was given the package of vaccines during his recent trip to Beijing last month, where he had gone for a routine medical review.

Upon his return, Chiwenga did not go into quarantine yet he was in China, the epicenter of Covid-19, giving credence to claims in government circles that the VP was safe from coronavirus infection, after receiving a shot of the new vaccine himself, which is believed to have passed secretive clinical trials at Chinese military research facilities.

Furious army commanders aligned to Chiwenga, are understood to have demanded that Mnangagwa gives the military under Chiwenga’s oversight, the responsibility to handle the coronavirus crisis, by allowing him to chair the national taskforce, following dismal failure by his health minister, Obadiah Moyo, to rise to the occasion in combating the coronavirus issue.

Chiwenga is now being deputised on the taskforce, by defence minister Oppah Muchinguri-Kashiri.

Spotlight Zimbabwe, reported last week that Chiwenga had also purportedly signed a Defence Pact with China, which will see Harare and Beijing becoming subsequent military allies. It was not apparent last night, whether the vaccines flown into the country to arrest the potential outbreak of coronavirus, could be a part of the pact’s provision on military medical research cooperation between the two nations.

“Yes it’s true but a classified matter of national security,” senior military officials based at the country’s defence college said this week.

“The vice president was given special coronavirus vaccines for Zimbabwe by China during his visit last month. Chinese military scientists have developed the vaccine and it has since passed clinical trials. The fact that Zimbabwe has received this special vaccine tells you how important and strategic this country is to China.”

The military officers said the vaccines were being kept at an undisclosed army facility, and that only the Joint Operations Command (JOC), also headed by Chiwenga knew of the locations, as the operation involves military doctors from both Zimbabwe and China.

Intelligence informants said they suspect the vaccines are being kept at Manyame Air Base, and other bases and barracks across the country.

“Manyame Air Base is a command center of many top secret missions and operations. We believe the vaccines could be warehoused there, because they have underground fallout shelters and facilities.”

The Manyame Air Base is a base of the Zimbabwe Defence Forces (ZDF) just outside Harare falling under the Air Force of Zimbabwe (AFZ) wing. It is one of the three major ZDF air bases in Zimbabwe. The other two being Thornhill Air Base in Gweru and Field Air Base in Chegutu.

Addressing the media after touring Wilkins Hospital in Harare which has been designated to deal with the virus, Chinese ambassador to Zimbabwe Guo Shaochun said China will support Zimbabwe and other African countries to deal with coronavirus.

“We will support the Zimbabwe government to adopt necessary measures to prevent the spread of the virus. I toured Wilkins Hospital and I now have a rough idea about the facility,” Guo said.

Some diplomats in the primate city, said they believe the special vaccine allegedly given to Chiwenga in secret, is also meant to cater for China’s growing nationals in Zimbabwe.

“Beijing is looking out for the health security of her own nationals in this country,” they said. “They have come up with a masterstroke in that regard, because their military and military doctors can pour into Zimbabwe at a moment’s notice to treat and/or evacuate their citizens in this country who are now almost topping 20 000 in population. Those Chinese nationals are obviously staying put in Zimbabwe, and a good number of them now have Zimbabwean citizenship.”

The South China Post, a Hong Kong English-language newspaper, reported yesterday, that China hopes to test a possible Covid-19 vaccine abroad as scientists look to carry out large-scale trials to test its effectiveness.

“Military scientists have been working on a vaccine and the results of the first-stage clinical trials will be announced later this month,” the paper reported.

Spokesman for the presidency, George Charamba’s mobile phone kept ringing without being answered yesterday evening, when we tried to reach him for comment.

Zimbabwe National Army (ZNA) public relations officials declined to comment, maintaining that the issue involved national security and “they have no clearance to talk to the media about it”.