Prominent Zimbabwean journalist, Hopewell Chin’ono has posted on social media some pictures which are purported to be a chat between reinstated MDC Secretary-General Douglas Mwonzora and an unknown person which suggest that Mwonzora is working with the ruling ZANU PF to elbow Nelson Chamisa out of power.

The alleged chat is leaked when the Supreme Court has just ruled on the MDC’s leadership crisis. The court ruled that Thokozani Khupe is the leader of the while Chamisa was reduced to a Secretary of Policy and Research.

Part of the chat suggests that Mwonzora would push for a Government of National Unity and he will become the Prime Minister.

Part of the alleged chat reads:

Mwonzora: Same as Chamisa he will also promote those on his side. But it is very fortu-nate on our side that HE the head of state is on our side do well never lose this battle to Chamisa, Biti, Ncube, Kore the list is endless but we need all the Provincial Structures, MPs, Senators, Coun-cillors as well as the wards. No chete ndivo vano fanira kubuda mu party then taenda ne nyika Nyamasvisva – – .

Other Speaker: Oky I have received the bundle Mr SG thank you. Ngawa tipe marl dze COVID-19 idzo tirwise MDC ALLIANCE takaguta hedu isu. And since last… I haven’t received anything im’ running out of data. And fuel as well.
Mwonzora: That alone shouldn’t worry you Comrade we are well oiled this time I will send you ten GB data. You need to stay tuned.
Other Speaker: But SG do you see MDC winning any election without toddler apa?
Mwonzora: We can do without him and we will be able to have a GNU set up imagine Comrade when Simboti becomes a Priminister, well create jobs for those we are working with. Same as Chamisa he will also promote those on his side. 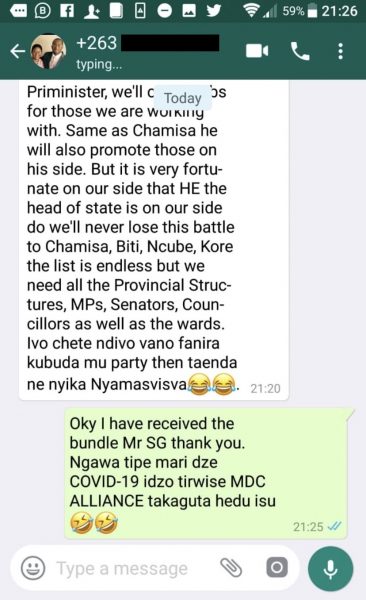 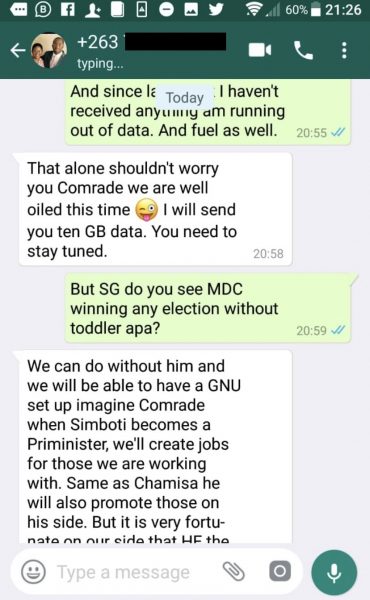 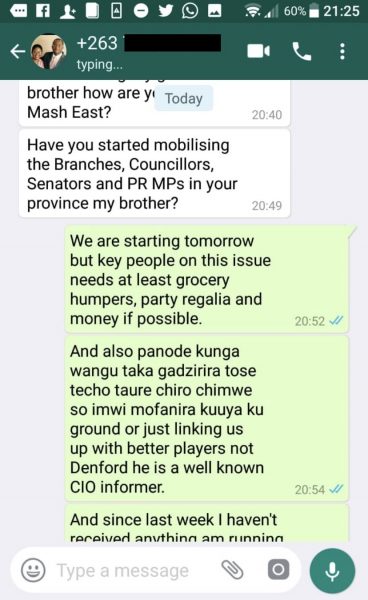 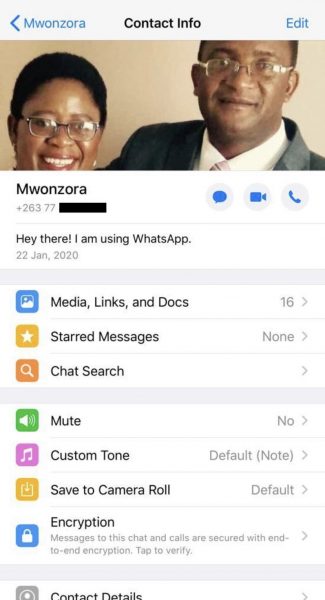