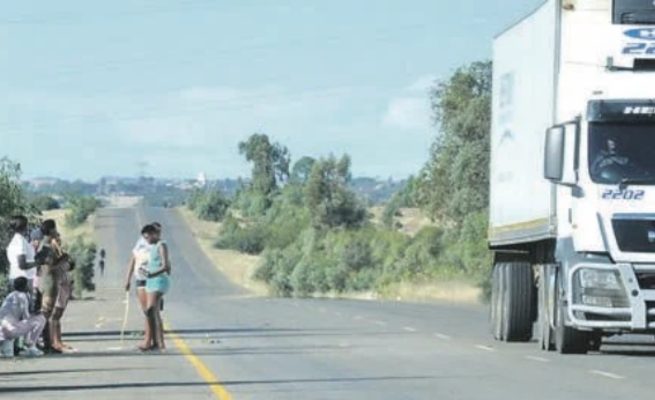 And that’s why magoshas on the Dewetsdorp road from Kimberley, Northern Cape, want to be reclassified as essential workers.

They told Daily Sun on Monday they won’t give up trying to get clients back.

They said the road, which is now quieter since the nationwide lockdown began, was still used by trucks delivering essential goods . . .

And those trucks are driven by men!

“We are here to keep them from going mad,” one women told the SunTeam.

A magosha (30), originally from Jabulani in Soweto, said she has two kids back home aged 12 and 9.

“I’m trying to make some money for them to survive,” she said.

A woman (27) from Maokeng near Kroonstad said she was dropped off in the area by a truck driver.

“I prefer to travel around the country with truck drivers. I sleep inside the truck,” she said.

“In two days’ time I could be in Cape Town.”

She said men including politicians who make laws love punani.

“I think they’re embarrassed to mention us as essential workers.”

She said so far truck drivers used face masks, sanitisers and gloves when they poke.

A woman (23) from Phelindaba in Mangaung said she hides when she sees cops and soldiers coming.

“We know we’re breaking the law by being outside. I fear the virus but I also fear dying of hunger,” said the woman.

A 29-year-old from Kimberley said the restaurant where she works as a waitress had closed.

“I have enough food for two months. I’m only trying to make R900 for rent,” she said.