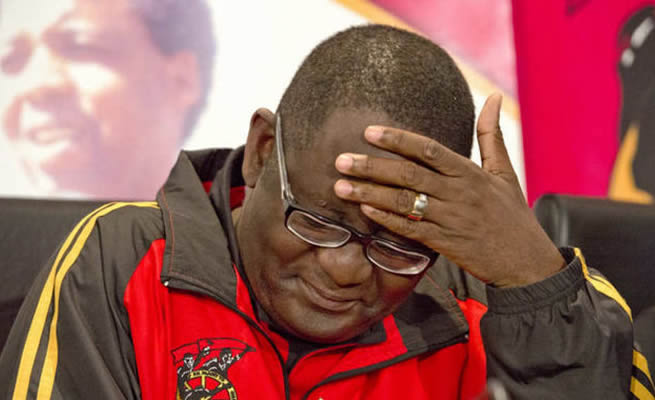 After his doctor insisted it was just the flu, trade unionist Zwelinzima Vavi was not convinced – days later he was hospitalised

HIS doctor insisted it was just the flu that had him feeling under the weather.

But Vavi wasn’t convinced his sleepless nights and fever were being caused by the flu. He hadn’t been overseas recently. Nor, as far as he knew, had he been in contact with anyone who had – but he knew that whatever was knocking him down wasn’t just the flu.

His doctor had taken his temperature and told him, “go away, it is way below the guideline [ for coronavirus]”, he tells us.

Two days later he went back to his doctor and was prescribed antibiotics but when those had no effect on his symptoms, he returned to demand more tests.

“I felt I had to act on caution. The flu persisted so I went back to the doc and insisted on proper testing – and boom, it was positive.”

South Africa learned of Vavi’s diagnosis with a tweet from the secretary general of the South African Federation of Trade Unions (Saftu). “It’s true I tested positive to #CoronavirusInSouthAfrica”, he wrote.

The diagnosis came in the second week of South Africa’s 21-day lockdown.

Vavi (57) was shocked and his thoughts immediately turned to his family – his businesswoman wife Noluthando (51), and their young twins, daughter Andisiwe Emihle and son Lubabalo Unako (7).

Arrangements were quickly made for them to be tested too.

Noluthando had to be tested twice because her first test result was “incomplete”, he says. But her final results were negative, as was their daughter’s.

Their son, Lubabalo, however, has also contracted the Covid-19 virus.

“I have no idea who infected me or how! I got a shock when it was confirmed. It may have been that

I walked in a space where somebody had coughed. I just don’t know, I can’t speculate,” he says.

The last gathering he attended was a Saftu meeting on 19 March, but since then, he hadn’t gone anywhere else, he says.

HIS condition took a turn and he was hospitalised on 5 April, after struggling to breathe properly. This was three days after he had been diagnosed. At first, he didn’t think it would be that bad because his symptoms were so mild.

“Gosh comrades, on the day I feel much better the lab called to say I tested positive for coronavirus! It’s mild but [I] need self-isolation at home! I will run it out, steam it out and just relax and observe all the rules!” he told SABC news shortly after his diagnosis.

But the day before he was admitted to hospital, which he prefers not to identify,

he began sweating a lot, and feeling exhausted, he recalls.

“I also had a light cough, but no respiratory problems.”

His condition worsened overnight, and by the next day he was battling to breathe.

“I had shortness of breath and there was a pain when I inhaled. I could feel this pain right from the top to the back of my lungs, and that’s what sent me to the hospital. My oxygen levels were low, and there were spots on my left lung suggesting that it may be pneumonia, but it’s definitely coronavirus.”

He’s feeling much better since returning home after three days in hospital, and with the help of prescribed sleeping tablets, his nights are restful once more.

“I was told by the doctors once you test positive there are two things you must do – make sure that you do a little bit of walking around to get the lungs working, and the second thing is to rest. I’m doing that and I’m getting better.”

He’s in self-isolation at home, while his son, who’s not showing symptoms of the virus, doesn’t need to be hospitalised.

They expect the boy, who Vavi says is “being kept at a distance” from the family, will be able to fight off the virus without medical intervention. Doctors have told his parents he’ll simply need to let the virus run its course – as has been the case with everyone who hasn’t required hospitalisation related to underlying health issues or serious breathing issues.

HOW does it feel to have had something that’s infected more than 1 million people around the globe and resulted in the deaths of thousands?

The trade unionist’s bout of coronavirus was a mild case, he was told, and he describes it as “a very painful flu”.

He felt fatigued, had a fever, sore chest and a dry cough.

About 80% of people infected with the virus are said to be able to recover without special treatment.

Vavi is taking no medication, other than sleeping pills to help him rest.

He believes his recovery is helped by the fact that he leads a healthy lifestyle.

He doesn’t drink and he quit smoking 20 years ago, something he urges all smokers to do.

“My deepest wish is that if you haven’t smoked [during lockdown] because you’re not allowed to go buy cigarettes, why go back to it? It’s a bad habit. I’ll never go back to it.

“My plea to all workers who were forced to stop smoking because of this situation is, don’t go back. If you were drinking every weekend, don’t go back to it.

“Stay healthy instead. That will guarantee us longer lives.”

Being isolated can be tough mentally, he says, but he acknowledges that it’s necessary to curb the pandemic.

This psychological pressure is the reason he’s been extra-active on social media lately, sharing videos of his journey with the virus with the world.

“I think it has helped to destigmatise the virus,” he explains, adding that it worries him that there are people who are still in denial about the seriousness of the illness.

These people are undermining the lockdown rules, he says, because they don’t believe Covid-19 will affect them.

“If it affects me, it can affect you too. You’re not special, I’m not special. This virus is invincible.

“It’s marauding through the world picking out the strong and the weak indiscriminately, black or white, rich or poor, informal settlements, workers and unemployed people.

“You may know me as a strong guy who fought political battles, but nobody

is immune from this virus.”

‘If it affects me, it can affect you too. You’re not special, I’m not special. This virus is invincible’